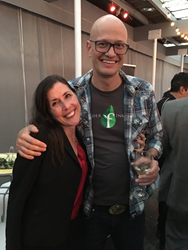 CEO, Adeo Ressi, of Founder Institute and CEO, Rosemarie Truman, of the Center for Advancing Innovation

Founders gain access to capital-efficient, commercially viable inventions from federal labs through two complementary accelerator programs from the Center for Advancing Innovation and Founder Institute.
The Center for Advancing Innovation (CAI), which leads the world’s preeminent global challenge-accelerator program to commercialize federally funded inventions, announced a new partnership with the Founder Institute, the world’s premier idea-stage accelerator and startup launch program. This initiative is created to strengthen efforts to increase the probability of launching successful startups to develop and commercialize federally funded inventions.

The Silicon Valley-based Founder Institute has chapters across 60 countries and 135 cities and has been utilized by many successful startups to transition from employee to entrepreneur, test ideas, build a team, acquire first customers, and much more. The Founder Institute capitalizes on its ability to effectively orchestrate face-to-face training and galvanize the community.

CAI has a notable track record of crowdsourcing talent from around the globe to compete to bolt startups around federally funded inventions. CAI provides an award-winning, virtual startup accelerator program for those that are accepted into its challenges. Each year, an average of 1000 people from around the globe participated in CAI’s startup challenges giving them a chance to launch a startup around a de-risked, capital-efficient, federally funded invention and gain assistance to acquire seed funding. CAI also provides world-class mentorship and in-depth, rigorous training that aligns with the inventions in the challenge.

In a normal accelerator, budding entrepreneurs bring their own inventions to develop. In CAI’s challenge-accelerator model, entrepreneurs select from one of the commercially-viable, federally funded inventions that are the topics of the challenge. Challenge inventions are sourced from the over 20,000 on which CAI has performed due diligence over the last four years.

Adeo Ressi, the Co-Founder and CEO of FI said, “A founder’s idea may change 10 times before having a startup that works; launching a company on the basis of an invention that the federal labs have spent potentially 20+ years and $10 million or more on is certainly a strong starting point for a company. Coupling a commercially viable invention with strong execution skills learned from the FI and CAI accelerator programs drive higher success rates.”

Rosemarie Truman, the Founder and CEO of the Center of Advancing Innovation, is also a director for the Founder Institute in the Washington, D.C. metro area. Ms. Truman said, “The CAI-FI partnership will create a higher probability of founders’ success given FI’s ability to galvanize entrepreneurship resources within regions and CAI’s ability to furnish capital-efficient, commercially viable inventions and also galvanize entrepreneurial resources within industries. The accelerator training provided through FI and CAI is highly complementary.”

About the Center for Advancing Innovation
The Center for Advancing Innovation (CAI) is a global public-private partnership non-profit focused on creating a virtuous circle of innovation and driving growth breakthroughs through novel, creative paradigms and models. CAI's mission is to accelerate and increase the volume of research commercialization in support of high growth business in order to ignite entrepreneurship, bolster the global economy and maximize the commercial and knowledge-based potential of promising inventions. CAI’s award-winning challenge-based accelerator, rigorous fact-based due diligence and capital efficient lean management models serve to hyper-accelerate “gazelle” high-performing startups for outsized investor returns. For more information about CAI, please visit http://www.thecenterforadvancinginnovation.org

Leaders of the world’s fastest-growing startups have used our program to transition from employee to entrepreneur, test their startup ideas, build a team, get their first customers, raise funding, and more. Based in Silicon Valley and with chapters across 135 cities and 60 countries, the Founder Institute’s mission is to “Globalize Silicon Valley” and build sustainable startup ecosystems that will create one million new jobs.

The Center for Advancing Innovation Partners with The Founder Institute