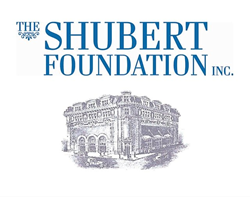 "We are convinced that talented artists and administrators are best able to decide how to use the funds we grant” - Shubert Foundation President, Michael I. Sovern

The Shubert Foundation’s 2016 Grants Program has awarded a record total of $25.6 million to 506 not-for-profit performing arts organizations across the United States. The 2016 grants mark the 34th consecutive year that the Foundation has increased its giving.

“This year we are delighted to be offering support to a record number of 506 performing arts organizations in locations all around the country,” stated Shubert Foundation President, Michael I. Sovern. “Our longstanding practice of providing help in the form of general operating support remains unchanged. We are convinced that talented artists and administrators are best able to decide how to use the funds we grant.”

Ranging from $10,000 to $325,000, the grants benefit a broad spectrum of arts organizations, from large to small, covering a wide range of locations around the country, from urban to rural. The Shubert Foundation is especially interested in providing support to professional resident theatre and dance companies that develop and produce new American work.

“Every organization receiving a 2016 Foundation grant has demonstrated an extraordinary commitment to the performing arts,” said Foundation Chairman, Philip J. Smith. “We want to help lift some of the financial burden so that the companies we support are able to focus on producing thought-provoking, relevant work for the widest possible audience.”

Two years ago, the Foundation established the Shubert Scholars Program. Grants go to seven leading colleges and universities. The funds are dedicated to providing scholarship assistance to students in graduate degree programs in theatre arts. Preparing the next generation of theatre artists is a central goal of the Foundation.

Since the establishment of the Shubert Foundation grants program in 1977, over $385 million has been awarded to not-for-profit arts organizations throughout the United States.

The Shubert Foundation continues its commitment to the Shubert Archive. Created by the Foundation in 1976, the Archive contains more than a century’s worth of production designs, scripts, sheet music, publicity materials, photographs, correspondence, business records and architectural plans. The collection, which has grown substantially over the years and continues to expand, is available to researchers, writers, historians and theatre professionals.

The Shubert Foundation, Inc., established in 1945 by Lee and J.J. Shubert, in memory of their brother Sam, is the sole shareholder of The Shubert Organization, Inc. Since its founding in 1900, The Shubert Organization has produced and co-produced hundreds of plays and musicals, both in New York and in cities across the country. Currently, the company owns and operates 17 Broadway theatres, and six Off-Broadway venues.

The Shubert Foundation, Inc.
Board of Directors