More than 27,000 visitors from 50 states and 24 countries who enjoyed the Sid Richardson Museum’s exhibition “Lonesome Dove: The Art of Story” confirm the continuing popularity of the 1985 novel and the 1989 TV miniseries. The museum was the trailhead for the Lonesome Dove Trail, a celebration started in January in Fort Worth that ends on July 23 with an exhibition mounted at the Old Jail Art Center in Albany, Texas. 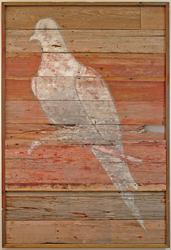 For those who missed the Lonesome Dove exhibitions in Fort Worth, they can see an exhibition mounted at the Old Jail Art Center in Albany, Texas, where the last exhibition on the Trail will be up through July 23. It’ll be worth the ride.”

On Sunday, June 19, 2016, Fort Worth bid farewell to Gus and Captain Call as the popular exhibition at the Sid Richardson Museum in Sundance Square, “Lonesome Dove: The Art of Story,” came to a close at sunset.

Since January, “Dovers” traced the path of “Lonesome Dove,” from Larry McMurtry’s Pulitzer Prize-winning novel to the movie script, and they explored the American West through Frederic Remington and Charles M. Russell artworks, a cowboy’s1868 cattle-drive diary, and objects on loan from the Lonesome Dove Collection in the Wittliff Collections at Texas State University.

Masterpieces by Remington from the Richardson’s collection and on loan from Amon Carter Museum of American Art, Fort Worth; Gilcrease Museum, Tulsa; and Museum of Fine Arts, Houston—which had never before been displayed together—were exhibited with production materials from the filming of the award-winning 1989 TV miniseries, “Lonesome Dove.” The production materials had never before been displayed outside of the Wittliff Collections, and some might never travel again due to their fragile condition.

“Thanks to Fort Worth Mayor Betsy Price’s vision, the community has had numerous opportunities to enjoy treasures from the Lonesome Dove Collection,” said Mary Burke, director of the Sid Richardson Museum. In mid-January, the museum was the trailhead for the start of the multifaceted January-through-June citywide celebration, The Lonesome Dove Trail. Mayor Price, TSU, the Fort Worth Convention & Visitors Bureau and generous sponsors and partners brought costumes, props, photographs from the beloved Western to multiple Fort Worth community locations plus one in Albany, Texas, via museum exhibitions, screenings of the TV miniseries, panel discussions, and a reunion gala of the cast and crew, including Robert Duvall (who portrayed Gus McCrae), Diane Lane, Barry Tubb, and others, held in the historic Fort Worth Stockyards.

"Just as seen in the TV miniseries, the Remington and Russell paintings and sculptures in our exhibition illuminated the narrative of the late 19th century American West," said Burke. "Our presentation of the West—through well-crafted words, video, set illustrations, costume designs, storyboards and works by Remington and Russell—was a first-of-its-kind exhibition for our museum, and it set the stage for the entire citywide celebration."

Burke encourages those who missed the opportunity to see the exhibitions in Fort Worth to visit an exhibition mounted at the Old Jail Art Center in Albany, Texas, where the last exhibition on the Trail will be up through July 23. “It’ll be worth the ride,” she said.

Admission is free to the museum at 309 Main Street, which is open daily except for major holidays. For information, visit http://www.sidrichardsonmuseum.org.