An enchanted place packed with personable creatures will help Ralph find what he needs the most—himself —in this inspirational young adult fantasy by C. Michael Bennis. 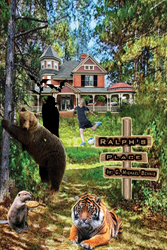 “The true sign of intelligence is not knowledge, but imagination.” Albert Einstein

Ridiculed in school because of her intelligence, Melissa takes comfort only in her ailing parents, who she cares for daily. As they approach death, they introduce her to a land full of mysterious creatures and experiences that children can only enter through their dreams.

Melissa grows to become a professor at the Massachusetts Institute of Technology, where she teaches mathematics. Despite her success, she can't forget her childhood and continues to seek the physical location of Ralph's Place. Eventually, a magician with the ability to teleport people decides to help Melissa with her search. And together, they are able to turn Ralph’s Place into an enchanted experience for a family with an only child.

Ralph Creston, a fourteen-year-old boy, moves with his parents outside of the city after his dad accepts a new job. Ralph is heartbroken as the only life he has ever known disappears in the rearview mirror. He and his family are off to a remote Victorian mansion, where his father has taken a new job.

There he meets another boy named Ralph, who has an unusual request: tell the three-legged dog-named Sam that he will be missed. And with that, Ralph is propelled into a series of adventures as he moves into a mansion full of possibility and promise.

Soon, Ralph will befriend a pie-thieving beaver, a fugitive vampire, and other mysterious creatures in a wondrous fantasy world—all thanks to a determined college professor who also explored Ralph's Place as a child.

Both children and adults will love Ralph's Place, a coming-of-age fantasy by author C. Michael Bennis

Former toy and advertising executive C. Michael Bennis again turns his attention to writing with the coming-of-age adventure Ralph's Place, his fourth book. Ralph’s Place, is a rich fantasy inspired by the daily bedtime stories he first created for his son Alex, who succumbed to cancer at six-years old, and later for Daniel who was a fan for many years. Ralph's Place: A Magical Experience