Limited Late Model and Pure Stock divisions to see increased payout for this race due to a memorial fund in honor of driver, Bryan Carnett. 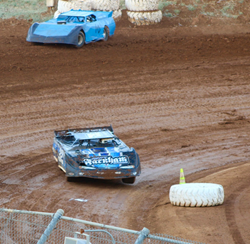 Placerville Speedway, under the promotion of Russell Motorsports, Inc., announced that they will host the Bryan Carnett Memorial Race on July 16, 2016. This date would have marked Carnett’s tenth year at the Placerville Speedway.

The Limited Late Model and Pure Stock divisions will have a payout increase of three thousand dollars for this race. This prize will be split with fifteen hundred dollars going to each of the two divisions, divided among the top three drivers of the feature event. The top two drivers in every class for the night will also receive a half gallon bottle of Dirt Solution product.

“I am thrilled that the Placerville Speedway was willing to host the Bryan Carnett Memorial Race in honor of my father. With the significant increase in the payout we are hoping for a great car count and an exciting night of racing, which is the best way to remember my dad. I am very grateful to family, friends and the local businesses who donated the prize money to make this night a reality,” said Forryst Carnett, racecar driver and son of the late Bryan Carnett.

Bryan Carnett was fond of the stock car divisions at Placerville Speedway, racing and sponsoring both Pure Stocks and Limited Late Models for the past ten years. Late Model stock cars are the premier stock car class raced at local and regional tracks in the United States. These purpose-built racecars weigh around 2,300 pounds and utilize both factory-designed crate and custom-built racing engines. The Pure Stock class is viewed as “true" stock car racing, consisting of only street vehicles that can be bought by general public with minor modifications made to the engine and suspension.

In North American auto racing, a short track is a racetrack of less than one mile (1.6 km) in length. Short track racing, often associated with fairgrounds and similar venues, is where stock car racing first got off the back roads and into organized and regulated competition. Many traditional fans and purists still see short track racing as the “real” NASCAR, because the lower speeds make “paint swapping,” where the bodies of the cars actually rub against one another, practical without a very high likelihood of serious accidents.

Placerville Speedway is a 1/4 mile dirt track located in the foothills of Northern California. Since 1965, Placerville has been a premier West Coast racing venue, hosting several racing divisions and many legendary drivers. The iconic track was cut out of a hillside, giving it higher banking, and covered with a dark red clay racing surface. Placerville Speedway is currently operated by Russell Motorsports, Inc., who took over as the track promoter in 2016. For additional information about the history of Placerville Speedway, visit http://www.placervillespeedway.com/history.