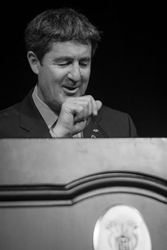 The bottom line is that the Commission has adopted a dangerous idea. And it has failed the most fundamental principle owed veterans who rely on VA health care, the principle that we should ‘do no harm.’

SAN FRANCISCO (July 6, 2016) –Swords to Plowshares’ Executive Director, Michael Blecker, today released the below statement and his dissent letter regarding the final report published today by the Commission on Care. Appointed to the Commission by Minority Leader Nancy Pelosi, Blecker was one of 15 members of the Commission on Care tasked with evaluating the Department of Veterans Affairs healthcare system.

Blecker was one of three Commissioners who declined to sign the final report. Blecker agreed with 17 of the 18 recommendations outlined in the Commission on Care’s report.

“The Commission on Care’s final report recommends many changes to the organization, operation, and direction of the VA’s health care services that are necessary to ensure our society fulfills its commitments to those who served it in uniform. I agree with the Commission’s recommendations that relate to Clinical Operations, Facility and Capital Assets, Governance, Health Care Equity, Information Technology, Supply Chain and Workforce management. These recommendations will strengthen veteran health care I and hope they are adopted promptly.

However I cannot agree to the Commission’s first and most significant recommendation, establishment of a proposed “VHA Care System.” Given the design of this proposed new delivery model, the adoption of this proposal would threaten the survival of our nation’s veteran-centered health care system as a choice for the millions of veterans who rely on it. Although this is only one of many recommendations in the Report, this single recommendation risks undermining rather than strengthening our veteran-centered health care system, and I cannot agree to it.

I speak as a Commissioner, a veteran, and a lifelong advocate for community-based veteran support services. I was working with veterans in need when the VHA was not the comprehensive, integrated, wrap-around provider of veteran-centered health care that it is now, and I do not want to see us move backward. When I joined the Commission I stated at one of our public meetings that I would not sign the report if I thought it would hurt veterans. The recommendation that redesigns the Veterans Health Care Delivery System by outsourcing the choice of primary care providers will do just that – hurt veterans. The bottom line is that the Commission has adopted a dangerous idea. And it has failed the most fundamental principle owed veterans who rely on VA health care, the principle that we should ‘do no harm.’”

Michael has a nationwide reputation for dedicated service and as an authority on veterans’ services and veterans’ rights. He served on the Advisory Committee on Homeless Veterans (2002-2007) which advises the Secretary; he is co-founder of both the National Coalition for Homeless Veterans and the California Association of Veterans’ Service Agencies. He has served on the Congressional Commission on Service Members and Veterans Transition Assistance, the California Senate Commission on Homeless Veterans, the San Francisco Mayor’s Homeless Planning Committee, the National Agent Orange Settlement Advisory Board, the Agent Orange Information Center, and the Veterans Speakers Alliance. He currently serves on the federal Commission on Care, examining veteran access to VA care.

Michael served in the U.S. Army from 1967 to 1970, with combat infantry service in Vietnam in 1968 and 69. He holds a juris doctor from New College of California School of Law and a Bachelor’s degree with honors from UC Berkeley.