New study from Hub Entertainment Research shows that 83% of Amazon users, and 93% of Hulu users, also use Netflix. 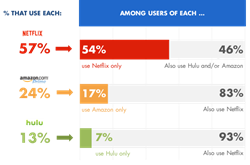 Netflix introduced streaming subscriptions to consumers. As Amazon and Hulu invest in content and original programming, many Netflix subs are adopting those platforms too.

Online TV content comes in many shapes and sizes—free with ads, TV Everywhere linked to traditional MVPDs, transactional platforms to rent or buy video, etc. But a new study from Hub gives more evidence that consumer demand is converging around one model: subscription on demand.

“Netflix introduced consumers to “all you can eat” subscriptions, and successfully sold them on a new model to discover, consume and pay for content. As Hulu and Amazon invest more in content and original programming, many viewers see value in multiple subscriptions with the same model,” said Jon Giegengack, Principal at Hub.

“Once the upstart challenging pay TV’s dominance, Netflix now finds itself as the Goliath of SVOD,” said Peter Fondulas, Principal at Hub. “Netflix doesn’t seem to run much risk of being replaced—viewers are adopting other SVODs in greater numbers, but to supplement Netflix not replace it. But where there will be more competition is to be the first stop on the virtual dial, as consumers’ finite TV time is allocated across more alternatives.”

“2016: Decoding the Default” is an tracking study among 1,200 US consumers with broadband, who watch at least 5 hours of TV per week. The first wave of the study was conducted in 2013. An excerpt and infographic of the report are available as a free download from Hub Entertainment Research. This data was collected in June 2016.

Hub Entertainment Research is a market-research firm with deep expertise in television, movie, videogames, music, publishing, and sports—anywhere that entertainment and new technology overlap. In the television industry, Hub analysts work with networks, content producers, MSOs, and digital distributors. Our job is to help our clients understand the greatest risks and most-promising opportunities facing their companies and to reveal the clearest paths to success in a changing marketplace. For more information, please visit us at http://www.hubresearchllc.com.