Music Choice And The Country Music Association Continue Partnership Through 2016 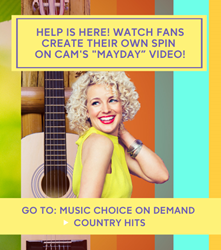 The Country Music Association continues its strategic promotional partnership with Music Choice, the No. 1 Free Video On Demand Provider in the U.S, for 2016. The partnership kicks off today with CMA Music Festival content appearing on Music Choice On Demand, Music Choice Music Channels, the Music Choice app, and MusicChoice.com. As part of the partnership, Music Choice will promote CMA content through 2016 for marquee events including “The 50th Annual CMA Awards” and “CMA Country Christmas.” Music Choice is available in 50 million homes nationwide.

Go behind the scenes to see fans show off their best moves and award-worthy performances to create this sing-along music video.

For more information on Music Choice log on to musicchoice.com.

About CMA Music Festival: The Ultimate Country Music Fan Experience began in 1972 as Fan Fair®, bringing 5,000 fans to Nashville’s Municipal Auditorium. Forty-five years later, the now legendary Festival has become the city’s signature music event with a daily attendance of more than 88,500 from every state and two dozen foreign territories. The event has been filmed for a network television special, a feat no other music festival has achieved, since 2004 and this is the 12th year the special will air on ABC. "CMA Music Festival: Country's Night to Rock" is executive-produced by Robert Deaton.