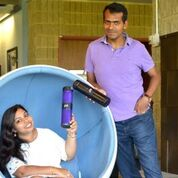 (R to L) The husband and wife team Harsh and Ankita Garg have learned that their unique Golchi travel bottle is the second-most popular thermos campaign in the history of worldwide crowdfunding.

It’s gratifying to know that the Golchi has such broad support and appeal among so many types of people – from on-the-go moms who need to carry hot water and baby formula at the same time to travelers who want to carry a hot and cold drink on a trip.

The new multifunctional Golchi Travel Bottle, which holds two drinks of drastically different temperatures in a single bottle, has become the most popular thermos campaign in the history of Kickstarter – raising more than $220,000 and topping 3,000 crowdfunding backers with less than a month remaining in its Kickstarter campaign.

The husband and wife team of Harsh and Ankita Garg also learned that their unique travel bottle has become the second-most popular thermos campaign in the history of worldwide crowdfunding – and that support is coming from consumers in countries around the world, a rarity among Kickstarter campaigns.

“It’s gratifying to know that we have come up with a product that has such broad support and appeal among so many types of people – from on-the-go moms who need to carry hot water and baby formula at the same time to travelers who want to carry a hot and cold beverage along with a snack when they are in flight or just going to work,” said Golchi Co-founder and Creator Harsh Garg. “We never dreamed we would surpass our original fundraising goal of $30,000 so quickly and by so much, which shows the wide appeal for the Golchi not just in the states, but around the world.”

Golchi has 15 innovative features, including the ability to carry two beverages in any combination of hot and cold at the same time – with vacuum-insulated compartments that keep drinks cold for 24 hours and drinks hot for up to 12 hours, along with a temperature gauge that shows which compartment has the cold and hot liquids. The bottle has the ability to adapt to every drinking situation and be used in four different modes. Golchi‘s modular design also includes a separate storage compartment, offering the perfect place to store protein powder, baby formula, cereal, snacks or even medicine.

With the success of the Golchi so far, the Chicago couple has unlocked one of the stretch goals they set for the campaign, offering the Golchi in a mix-and-match option with six colors and four styles to choose from when they reached $150,000 in crowdfunding.

“If we can make it to $250,000 from our crowdfunders, we’ll be unlocking our next stretch goal – allowing backers to choose from three specific city skylines that will be voted by the backers of the bottle,” Garg said. “That would be cool, having your favorite city on your favorite gear all the time.”

The Golchi, which has a modular design that allows it to go from big-to-small, or from one to two bottles in an instant, also features a three-point patented controlled-flow mechanism, which allows users to pick the size of the drinking spout to conform with the hot or cold beverage they’re about to consume. Golchi’s multi-purpose lower compartment is standardized to carry soda cans and, because of its wide mouth, it can also be used as a food canister for carrying breakfast cereals or a variety of snacks. The Golchi was also designed with an add-on, collapsible tea infuser that can be carried in the middle compartment and placed on the mouth of lower compartment when in use. It also comes with built-in extenders, so it can also be used with cup holders of varying sizes for the perfect fit.

Garg says they’ll continue to offer special Kickstarter pricing, at about $30 less than the full retail price, while quantities last.