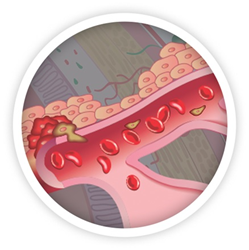 Circulating tumor cells can serve as a clear indicator of the presence of cancer in the body, often earlier than other indicators or detection methods. The technological challenge is to detect these extremely rare cells in the blood and to keep them viabl

CellMax Life, the precision cancer testing company, announced today that CellMax CRC-Protect, its blood-based test for early detection of colorectal cancer based on the CMx Platform®, is now available in Taiwan.

The CellMax CRC-Protect blood test has been clinically proven for colorectal cancer detection in two separate studies of over 500 Taiwanese patients at leading medical centers in Taiwan, including Chang Gung Memorial Hospital (CGMH).

For moderate to high risk patients, the clinical studies showed that over 90% of the time the CMx Platform correctly identified the patients who had colorectal cancer.

The breakthrough test requires only a blood sample, which can be drawn as part of a regular healthcare provider visit; no dietary restrictions or medication alterations are necessary.

Colorectal Cancer on Rise in Taiwan

“Only 30 percent of patients in Taiwan over age 50 are being regularly screened according to medical guidelines,” said Dr. Mana K Javey, MD, PhD, VP of Medical Affairs, CellMax Life. “A simple CRC blood test can be useful as an early warning system, to the vast majority of patients who are non-compliant to other screening tests such as colonoscopies and stool tests.”
Late Stage Colorectal Cancer detection has higher costs & a higher mortality rate.

Although screening and early detection of colorectal cancer have been conclusively shown to save lives, about 50 percent of colorectal cancer cases are not detected until stage 3 or 4, where the survival rate can drop to as low as 10%, compared to a survival rate of more than 90 percent for early stage cancer. The costs of treating late stage cancer can be as high as USD 200,000 per patient, prohibitive for most patients.

“CellMax CRC-Protect's ability to detect colorectal cancer in early stages, with a convenient blood test, can be a valuable early warning system for the vast majority of those who are reluctant to take a stool test or colonoscopy for screening.” said Dr. Ashish Nimgaonkar, MD, Asst. Professor of Medicine (Gastroenterology) and Assoc. Medical Director, Center for Bioengineering Innovation and Design, Department of Biomedical Engineering at Johns Hopkins University, USA.

A major new development in cancer research over the past decade has been the role of circulating tumor cells (CTC). Circulating tumor cells are cells shed from the primary tumor site into the bloodstream, where they then may travel to other sites in the body to form metastatic lesions, or to be destroyed.

“Circulating tumor cells can serve as a clear indicator of the presence of cancer in the body, often earlier than other indicators or detection methods,” said Dr. Rui Mei, PhD, CSO of CellMax Life. “The technological challenge is to detect these extremely rare cells in the blood and to keep them viable for further analysis.”

The tremendous difficulty of identifying these rare circulating tumor cells can be understood by looking at the order of magnitude of their presence at different cancer stages:

“The most effective way to prevent colorectal cancer mortality is to detect it early,” said Dr. Tsai Wen-Shi, MD, PhD, of CGMH. “This non-invasive blood test based on the CMx platform, with high clinically demonstrated accuracy and high accessibility, has the potential to detect cancer at earlier stages.”

The fundamental principle behind the recent breakthrough in early CRC detection relies on the ability to find extremely rare, abnormal cells in a sea of billions of normal cells in a blood sample. The CMx Platform™ can detect rare abnormal, potentially cancerous cells in the blood, just like a very vigilant radar. With this new technology, early‐stage colorectal cancer, and even pre‐cancer, can be detected.

Lily Liao, a resident of Taipei, has been vigilant about her health for many years.

Lily stated, “Despite having a family history of cancer, including my oldest brother passing away because of colorectal cancer, I was afraid of the side effects of anesthesia and of the risk for my colon to be injured during a colonoscopy so I avoided it. I heard the CellMax Life CMx platform test could detect abnormal colon cells in the very early stages of cancer from a simple blood draw, and decided to take it."

When her test came back abnormal, Lily Liao went for a colonoscopy, which found several polyps in her colon, including some pre-cancerous polyps, which the doctor removed.

“If I’d never taken the CellMax CMx platform blood test, I would probably still believe I would not get colorectal cancer in the absence of symptoms. Now I am finally relieved, and take the CellMax Life test regularly to monitor my condition,” Lily concluded.

About CellMax Protect and the CMx Platform

CellMax Life’s patented CMx Platform is clinically proven to detect early-stage circulating tumor cells (CTCs) that are shed from the primary tumor site into the bloodstream in early stage cancer. The CMx Platform uses a biomimetic, lipid-bilayer coated microfluidic chip to capture these rare cells in peripheral blood. The test can be useful in cases of non-compliance with recommended colonoscopies or messy stool tests, and as a supplemental screening.