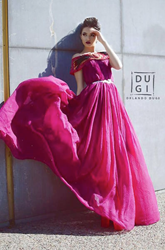 “For the past two years, the Haute Couture Fashion Show has been held at Cathedral Park and has been overwhelmingly attended,” said Dallin Maybee, chief operating officer of SWAIA. “This year’s Haute Couture Fashion Show’s new location, the Santa Fe Community Convention Center’s outdoor courtyard, will allow more people to attend.” Ticketed seats can be purchased for $10, while standing is free to the public.

The Haute Couture Fashion Show acts as an arts innovator by showcasing some of the most influential and popular Native designers today. This year’s designers include fashions by Jamie Okuma, the youngest artist to win Best in Show at the SWAIA Indian Market and the only artist to win first place three times; Dorothy Grant, an IAIA graduate and trailblazing designer known for her West Coast Nations inspired garments; Sho Sho Esquiro, who uses organic fabrics as well as recycled leathers, furs, and trims in vibrant colors to create a unique, fresh look with an urban-Native twist; Orlando Dugi, who creates life-like and cutting edge fashion featuring natural motifs, the human physique, and abstract designs; and Patricia Michaels, who has garnered international attention after she was a contestant and first-runner-up on Project Runway, Season 11, which aired in 2013 on Lifetime.

###
About SWAIA:
The Southwestern Association for Indian Arts (SWAIA) is a non-profit organization supporting Native American arts and culture. It creates economic and cultural opportunities for Native American artists by producing and promoting the Santa Fe Indian Market, the biggest and most prestigious Indian art event in the world since 1922; cultivating excellence and innovation across traditional and non-traditional art forms; and developing programs and events that support, promote, and honor Native artists year-round. swaia.org

About Amber-Dawn Bear Robe:
Amber-Dawn Bear Robe (Blackfoot/Siksika) is an art curator and art historian, currently teaching art history at the Institute of American Indian Arts. She produced SWAIA’s first official fashion shows in August 2014 and 2015 and is organizing the fashion show for the 2016 Indian Market. Bear Robe has worked for organizations such as the Tweed Museum of Art, the Museum of Contemporary Native Arts, the Museum of Indian Arts and Culture and the Santa Fe Independent Film festival. Before moving to Santa Fe, she was the Director/Curator of Urban Shaman: Contemporary Aboriginal Art, the largest Aboriginal artist-run center in Canada. Bear Robe has a Masters degree in Art History from the University of Arizona and an additional Graduate degree in Native American Studies.

Pam Baker (Kwakwaka'wakw/Sqaumish) began a lifelong search to provide First Nations people a stage to showcase their culture. As a single mother, she moved her two children to Los Angeles, California to study at Otis College of Art and Design where she obtained her degree in Fashion Design. Her newly acquired degree provided her with the technical skills and business acumen to focus her efforts on designing a future that would honor her ancestors. Baker is the creator of Touch of Culture, where modern technology blends style with traditional values and symbols.

Orlando Dugi (Navajo) designs work that embodies a fresh statement through beads and fine materials such as silks, crocodile leather, crystals, feathers, velvet, gold and gems. Ideas of elegance, fashion, and creativity are evident in every piece of eveningwear and accessory he creates. Most of his work is a single bead stitch technique utilizing the smallest beads, drawing attention to detail and precision. From floral motifs to birds and animals, the human physique, and abstract designs, Orlando’s images are life-like and cutting edge.

Sho Sho Esquiro (Kaska Dene/Cree) is an award-winning artist who is inspired by her Native North American roots and respect for nature, which is derivative of her upbringing in Yukon, Canada. Esquiro uses organic fabrics as well as recycled leathers, furs, and trims in vibrant colors, resulting in a melding of her passion for hip-hop culture with her aboriginal heritage to create a unique, fresh look with an urban-Native twist. Each garment is handmade to ensure couture quality and artistic authenticity.

David Gaussoin (Picuris Pueblo/Navajo) of Picuris Pueblo, Navajo, and French decent, stems from a long line of artists on his mother's side with various silversmiths, painters, rug weavers, sculptors, and wood workers. Gaussoin works with gold, sterling silver, and precious and semiprecious stones, as well as incorporating materials not necessarily associated with jewelry, such as steel. He uses various techniques, from traditional Tufa casting and hand stamping to wax castings and lapidary. The artist focuses his work towards the perfection of craftsmanship and pushes his designs to new, unexplored realms of jewelry.

Wayne Nez Gaussoin (Picuris Pueblo) born in Santa Fe, New Mexico, is from a family of artists who taught him the art of silversmithing. Nez Gaussoins’ style is a mix of traditional Native American applications with a contemporary flair. He experiments with non-traditional materials and possesses a progressive sense of design that incorporates his interest in art, photography, music, and fashion design.

Dorothy Grant (Haida) has been an internationally renowned contemporary fashion designer for over 32 years. In 1988, Grant became the first designer to merge Haida art and fashion utilizing her formal training at the Helen Lefeaux School of Fashion Design. Grant believes that her clothing embodies the Haida philosophy Yaangudang, meaning “self respect.” The driving force behind her clothing designs is “empowerment, pride and feeling good about oneself.” After 17 years in retail and manufacturing, Grant has transformed her entrepreneurial focus to Native art market trade shows and online sales through her website.

Patricia Michaels (Taos Pueblo), a traditional Native woman, is a style-maker at the forefront of modern fashion design and aesthetics. She creates boldly hip designs with a quality of timeless elegance. In 2012, she was asked to join the Season 11 cast of Project Runway on Lifetime.

Jamie Okuma (Luiseño/Shoshone-Bannock) began bead working as a child creating her own dance regalia for powwows near her home on the La Jolla Luiseño Reservation. At the age of 22, Okuma became the youngest artist in the history of Santa Fe Indian market to win Best of Show, which would become the first of three Best of Show awards: two from SWAIA and two from the Heard Museum Indian Fair and Market.

Crystal Rose Demientieff Worl (Tlingit Athabascan) is from Raven Moiety, Sockeye Clan, from the Raven House. She is a child of a Thunderbird and from the Chilkat region in Southeast Alaska. Raised between Fairbanks and Juneau, she was introduced at a young age to her traditional arts, practices, and storytelling. Crystal experiments with kiln-cast glass, printmaking, painting, and silversmithing. She recently began working with fish skin, seal gut-skin, and furs. Crystal studies traditional Tlingit form line design and Athabascan beadwork patterns.