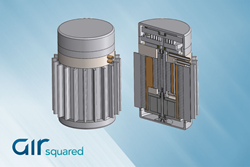 The innovative Organic Rankine Cycle (ORC) design relies heavily on Air Squared’s extensive experience in scroll technology, which despite being around for over 100 years has seen little use as a positive displacement expander. Leveraging scroll technology allows the integration of all components into a closed cylindrical container wherein the working fluid flows about a torus in a poloidal direction, reducing size, system complexity, and cost.

An ORC is a power generation cycle similar to a conventional Rankine cycle, but instead of using water and steam as the working fluids, it uses an organic fluid with a high molecular mass and low boiling point. This cycle can then be used to extract power from low-grade heat (i.e., low temperature) energy sources, such as renewable energy or process waste heat, and convert it into useful electricity.

Air Squared’s Compact Torus-Shaped ORC is similar to a traditional ORC in that it utilizes an organic working fluid with a secondary fluid as the heat source in the evaporator, and ambient air acts as a heat sink in the condenser. However, the Compact Torus-Shaped ORC features an innovative, vertically stacked arrangement with the high-pressure side centered at the top and the low-pressure side positioned at the bottom. Leveraging Air Squared’s significant experience with custom scroll expander design, the arrangement is made possible with scroll components (i.e., pump, expander, and generator) operating on a common shaft and allows for increased efficiency, reduced vibration, minimal noise, and oil-free or lubricated operation.

At roughly the size of a home air conditioner, the Compact Torus-Shaped ORC can use natural gas as a heat source when gas prices are low, then switch to alternative sources when gas prices are high. Integrating all components in a closed cylindrical container significantly reduces the size, system complexity, and cost.

While reciprocating engines are the most widely adopted distributed energy technology, their reliance on fossil fuels disqualify them as a long-term solution. Consequently, solar photovoltaic (PV) has become the favored option for sustainable distributed power; however, PV remains expensive at $4,000 per kW, making it hard to compete with diesel and natural gas at less than $1,000 per kW. Power generation is also intermittent, generally lasting half a day.

Traditional ORCs offer an opportunity to transition from conventional fuels to renewable energy, but they face similar cost challenges to PV. Commercially available systems are constructed in an elementary manner with each component existing independently, making installation not only costly but also impractical for most locations. At $3,000 per kW and an estimated payback period of four years, the Compact Torus-Shaped ORC can finally offer residential and commercial markets a distributed energy technology that is sustainable, flexible, and affordable.

Phase I SBIR funding for the Compact Torus-Shaped ORC supported several key objectives. First, to achieve an effective fluid transfer between the rotating and stationary components on the same shaft, various designs and arrangements for the heat exchangers were investigated, and a solution was identified. Second, the commercial viability of Compact Torus-Shaped ORCs in terms of size, capacity, cost, and heat source was extensively investigated. A prototype system with a 2.5 kW net capacity using solar thermal power was proposed for Phase II development. Finally, the condenser and evaporator proposed for Phase II development were built and tested, and they exceeded efficiency targets.

While the Phase II SBIR will realize a working Compact Torus-Shaped ORC prototype in the 2–4 kW range, the effort will initially focus on the development and verification of five primary components: scroll expander, scroll pump, generator, evaporator, and condenser. The components will then be integrated into a working Compact Torus-Shaped ORC prototype for extended testing and further verification.

Air Squared is the industry leader in oil-free scroll design and manufacturing. By introducing a simple design with fewer moving parts, scroll technology has established itself as a highly efficient, very reliable, cost-effective alternative. Through a growing line of compressors, vacuum pumps, and expanders, Air Squared makes the many advantages of oil-free scroll technology available to OEMs and specialty applications worldwide.