"Twerk Lesson" is a lean, taut, energetic demonstration of the power of dance. Viewers have responded in turn, having amassed over 3.7 million YouTube views and counting! 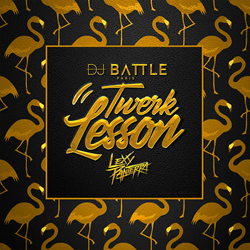 DJ Battle’s "Twerk Lesson" clip is a master class in a provocative dance style that has dominated music videos for the past decade. And even if you think you've seen twerking perfected in recent hip-hop and R&B clips, you still might not be ready for Lexy

Many songs and videos promise plenty but don't deliver much. A few, though, are exactly what they claim to be -- and sometimes more. DJ Battle and Lexy Panterra offer the viewer a "Twerk Lesson", and for three minutes and change, they deliver. The "Twerk Lesson" clip is a master class in a provocative dance style that has dominated music video for the past decade. And even if you think you've seen twerking perfected in recent hip-hop and R&B clips, you still might not be ready for Lexy Panterra's jelly. The four twerking sequences in this "Lesson" aren't just sexy -- they're astonishing, too. As all fans of R&B video know, a great twerker makes moves that seem impossible for the lower body to do. Panterra's buttocks turns the laws of physics inside out.

But "Twerk Lesson" is more than just a showcase for Lexy Panterra's choreography and her strong singing voice. It's also a legitimate banger by a club deejay who has earned a massive following in Europe for his audacious sound. The Paris-based DJ Battle is, perennially, among the most popular spinners in France -- he's a social-media favorite who has worked with some of the biggest stars in his country and performs over a hundred shows a year in over twenty countries. "Twerk Lesson" is his first American hit, but he's no stranger to these shores: he's been deejaying in U.S. dance clubs for years. Remarkably for an independent musician, he's sold more than a million copies of his much cherished mixtapes.

His international Internet popularity makes him a natural match for Lexy Panterra, another artist who has taken her music (and her moves) directly to the people. Her mesmerizing freestyle twerking clip for "Lit", her 2015 hit, was a YouTube smash. Even the casually-made clips she posts to streaming services -- like a remarkable short film, shot in Vegas, of the singer and dancer twerking to "Billie Jean" -- draw millions of views.

"Twerk Lesson" is no casually-shot affair. Instead, it's a lean, taut, energetic demonstration of the power of dance. Viewers have responded in turn, having amassed over 3.7 million YouTube views and counting! Panterra uses a handsome modern house as the backdrop for her twerking, and the camera follows her from the bedroom to the bathroom to the outdoor swimming pool in what seems to be one sustained, breathless shot. When she hits the floor -- as she does in each of the song's exciting electronic breaks -- she barely even breaks a sweat. It's hardly the first time the singer has given a lesson like this one: Panterra's twerking expertise has made her an in-demand dance instructor and fitness expert. So remember, while you're watching with your mouth agape: this isn't just salacious. It's educational, too!

We would very much love to see this video get into your programming and are here to help make that happen. Please don’t hesitate to get in touch with us here at HIP Video Promo and let us know what we can do! You can also visit http://www.HIPVideoPromo.com and http://www.Facebook.com/djbattleofficiel for more information on DJ Battle, Lexy Panterra, and “Twerk Lesson.”