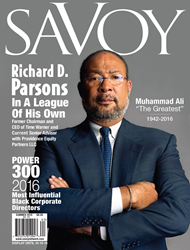 Richard Parsons, Former CEO of Time Warner is Featured with an Exclusive Interview on one of Savoy's Dual Coverr for the Summer Issue 2016

It is our duty to chronicle these inspiring executives, their distinguished careers and the corporations that demonstrate inclusive board composition in Savoy.

Savoy Magazine announced the release of their Power 300: 2016 Most Influential Black Corporate Directors listing in the upcoming Summer issue. Savoy’s summer issue features a directory of 300 directors serving on the boards of public companies. As the leading business magazine reporting on African American success and achievement, Savoy’s Most Influential Black Corporate directory is the premier listing of African-American executives, influencers and achievers contributing leadership to corporate boards.

“Savoy continues to be at the forefront of comprehensive coverage of the professional success and achievements of African Americans.” said L.P. Green, II, CEO & Publisher of Savoy Magazine. “It is our duty to chronicle these inspiring executives, their distinguished careers and the corporations that demonstrate inclusive board composition in Savoy. We offer congratulations and appreciation to the directors recognized in Savoy’s Most Influential Black Corporate Directors edition for their inspiring leadership.“

At 532 pages, the summer issue of Savoy ranks as the largest magazine by pages ever published targeting the African American consumer. The dual cover issue, features one with Richard Parsons, former CEO of Time Warner and a second cover featuring a memorial tribute to the life of cultural icon Muhammad Ali.

Parsons provides an intriguing example of how he leveraged his talents as a board director into the C-Suite. Parsons joined the Time Warner board of directors in 1991, negotiated the America Online merger that created a $165 billion media conglomerate and was later named CEO. Parsons shares his perspective and insights on his professional journey in his exclusive interview featured in Savoy’s Summer issue.

Savoy Magazine is a national publication covering the Power, Substance and Style of African- American lifestyle. From entertainment to sports, business to politics, design to style, Savoy is a cultural catalyst that highlights timely topics and drives positive dialogue on and about Black culture. Savoy is published quarterly with a worldwide distribution via subscriptions and newsstands. Connect with Savoy: Twitter - http://www.twitter.com/savoynetwork, Facebook - http://www.facebook.com/savoymagazine, LinkedIn - http://www.linkedin.com/company/savoy-magazine.