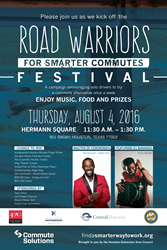 To alleviate the 203.2 million hours of annual traffic delay in the Houston region,Houston-Galveston Area Council (H-GAC), a voluntary association of local governments, has partnered with Houston Mayor Sylvester Turner to unveil a campaign initiative designed to link commuters to alternative transportation options.

“It is critical for Houston and our surrounding communities to participate in alternative commuting options so we can set an example of how to effectively serve a rapidly growing population without putting more vehicles on the road,” said H-GAC Director of Transportation Planning Alan Clark. “Everyone deserves an efficient, easy-to-use transportation infrastructure.”

H-GAC officials and Turner will reveal the Road Warriors initiative Aug. 4, inclusive of a comprehensive digital resource found at findasmarterwaytowork.org during the Road Warriors Festival at Houston City Hall and Hermann Square from 11:30 a.m. to 1:30 p.m.

Thousands are expected to attend the free festival, which is open to the public. Festivities will begin with a news conference hosted by H-GAC and Turner, and both event segments will be emceed by local media personalities.

“As traffic throughout the region continues to grow, it is our role to provide citizens with alternative transit options for the safety and wellbeing of the region,” said Clark. “Our partnership with Mayor Turner is essential to alleviating harrowing congestion faced by our commuters.”

The 2015 Urban Mobility Scorecard ranked Houston as the fourth worst region in the nation for congestion. The Road Warriors initiative aims to solve this issue by offering commuters and employers practical solutions and resources, which will be unveiled at the Road Warriors Festival.

H-GAC’s Road Warriors campaign is part of Commute Solutions, an initiative designed to reduce congestion and pollution as well as encourage transit participation.

The Road Warriors Festival kicks off Commute Solutions Month that will allow commuters and employers to get up close and personal with the resources H-GAC’s new website offers. Food, music and raffle prizes, such as gift cards, a signed Astros jersey and a free hotel stay, will be offered.

For more information on how to participate in alternative transportation options near you, visit findasmarterwaytowork.org.

ABOUT HOUSTON-GALVESTION AREA COUNCIL
Houston-Galveston Area Council (H-GAC) is a voluntary association of local governments and elected officials from the 13-county Gulf Coast Planning Region — an area of 12,500 square miles with more than six million people. H-GAC is designated by the State of Texas as the region's Metropolitan Planning Organization for transportation planning for Brazoria, Chambers, Fort Bend, Galveston, Harris, Liberty, Montgomery and Waller counties.