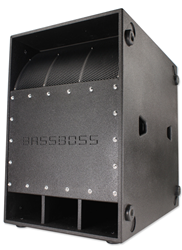 Extended, flat frequency response and massive dynamic power are desirable for any style of music, and are why the VS21 “Rum Punch” really can do it all.

Austin-based powered loudspeaker manufacturer BASSBOSS is stirring the speaker world with its new VS21 “Rum Punch” powered subwoofer. The VS21 features some of the company’s latest innovations in cabinet design, enabling it to achieve a revolutionary balance of low end that is both impactful and full-bodied. The VS21's best-in-class performance in the low frequency range makes it an excellent choice for a wide variety of music genres: from EDM to rock, and anywhere in between. Boasting an impressive output SPL characterized by an unparalleled combination of hit and heft, the VS21 Rum Punch is perfectly suited to professionals and venues that demand a no-compromise, do-anything low end.

Best of Both Worlds
“In designing the VS21 I set out to create a product that combined the low-frequency extension of our vented dual 18" subwoofers with the hard-hitting punch of our horn-loaded subwoofers,” explains BASSBOSS president David Lee. “Now, with the ‘Rum Punch’, users no longer have to choose between deep or punchy subwoofers, the VS21 gives you both. It can satisfy the demands of everything from hard-hitting, live kick drums to the deep, rolling bass of an 808. Whether for shows that span a lot of genres, or simply because you want a subwoofer that can do it all, the VS21 has you covered.”

Driving Innovation at the Low-End
The VS21’s hybrid vented short horn enclosure delivers exceptional transient response thanks to performance efficiencies at the upper end of its operating range. This is expressed as a fast attack, which is highly desirable for acoustic instruments like kick drums and bass guitars. At the same time, the enclosure is optimized for low frequency performance and depth, thanks to a large acoustical volume, low tuning, and the massive displacement of a long-excursion 21" woofer — up to 58mm of excursion peak-to-peak. With a frequency response of 27-100 Hz and 132 dB of continuous output at the ready, the VS21 offers much deeper and smoother response than similarly-sized horn-loaded boxes, while still delivering high-impact power and tremendous dynamics.

“We combined the best attributes of our vented and horn-loaded subwoofers, so the two sections are able to work in tandem, damping each others' resonances. This makes the system neutral and transparent sounding,” says Lee. “Extended, flat frequency response and massive dynamic power are desirable for any style of music, and are why the VS21 “Rum Punch” really can do it all.”

Upgrading from the Bottom Up
The VS21’s dimensions (36” x 24” x 36”) allow for easy integration into existing speaker cubbyholes, providing a cost-effective and straightforward path for venues to upgrade the low-end performance of their systems without a 'rip and replace' renovation. Its smaller frontal area also allows more output to be focused forward from a limited area than a typical set up with dual 18” subs. The VS21's enclosure is made from 18mm Baltic Birch plywood with dado joints and stainless steel hardware. It is finished with a rugged, touring-grade, waterproof, polyurea coating. This enables it to stand up to the demands of day-to-day life in the club or on the road. Covers and wheel carts are also available.

Ready to Rumble
Like all BASSBOSS loudspeakers, the VS21 “Rum Punch” is active, powered by a built-in 2400W RMS amplifier that includes all of the necessary processing for seamless 'plug-and-play' operation. An included low-pass filter provides a broad, flat frequency response without the need for any EQ. The VS21 also features a sophisticated limiter system, which protects the woofer from thermal and overexcursion damage. This enables users to achieve maximum output from the loudspeaker without concerns about overdriving it.

A Full Spectrum of Flexibility
“So many venues and festivals play host to performances that span the full gamut of genres, and sometimes even in the same night,” comments BASSBOSS CEO Lian Amber. “The VS21 combines several innovative BASSBOSS subwoofer technologies in a single product, which is designed to outperform other options in both quality and versatility in every environment. For anyone who has been waiting for a sub that can handle whatever you throw at it, the VS21 “Rum Punch” has arrived."

About BASSBOSS
BASSBOSS creates premium, ultra high-fidelity sound systems for the professional consumer, live sound and systems integration markets. The company was founded on the design and engineering expertise of David Lee, a pioneer in subwoofer design whose work has transformed the audio systems for hundreds of venues across North America. BASSBOSS systems are easily integrated, compact and power-efficient. Each cabinet is self-contained, with comprehensive amplification and processing capabilities. For more information on BASSBOSS, please visit http://www.bassboss.com