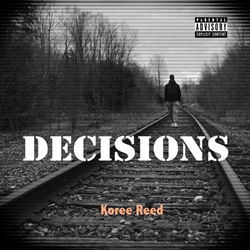 Koree Reed is currently seeking press opportunities, interviews, features, and more. He can be reached through his official Twitter page.

Three years later he released his first and only mixtape titled "Decisions" on June 25th 2016. The mixtape takes the listener through various moments in the young rappers life from when he got denied a scholarship at Syracuse, to his grandma having a stroke, and everything in between. The mixtape while still fresh made datpiffs "whats hot page" with artists like Drake,Future, snoop dog, and riff raff.

In high school Koree was a captain of the football team at Skaneateles High school where he lead his team to a perfect undefeated season season. In 2011 he broke the school's record for receiving yards in a single season and was selected to the first team all State, first team all district, citizen papers all star team, and played and scored in the upstate vs downstate all star game. He was ranked the #4 receiver in the state according to maxpreps.com even though he played in 2-3 less games then the receivers ranked above him. Koree is currently attends Hartwick college in New York where he plays both sides of the ball in football and majors in sociology with a minor in criminal justice.

For all the latest music by Koree Reed, be sure to check out his official Soundcloud page.