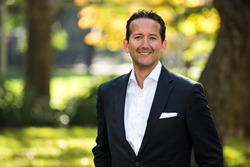 As CEO of Dave Partners, Dave Carvajal is a sought-after headhunter, advisor and consultant to boards of directors, venture firms and CEO entrepreneurs.

The Business Expert Forum is held each year by the Entrepreneurship Students Club of Harvard Business School. As a master headhunter and expert in finance and executive leadership, Dave was invited to share his experiences with 120 emerging entrepreneurs and future leaders.

“Dave is purpose-driven and committed to leading by serving others. His passion for building a better workplace and a better future left a powerful impression on everyone at the forum,” said Alex Jeffreys, Founder and CEO of MarketingWithYou, Inc., which was rated one of the fastest growing privately-owned companies in North America by Inc. Magazine.

During his talk, Carvajal, who grew up in Williamsburg, Brooklyn in the 1970s, recalled his neighborhood’s rough past and how a clear purpose changed his own direction in life. “My mom taught me to believe that we could rise up from our humble beginnings and become anything we set our minds to. She was programming me with clarity of purpose,” said Carvajal at the event. “Today, I’m on a mission to eliminate human suffering in the professional workplace. I serve public company boards, CEOs and startup entrepreneurs who themselves are using technology to make the world better.”

Dave Carvajal is an intrepid builder of billion-dollar businesses and a thought leader in the executive recruitment space. As CEO of Dave Partners, a bespoke executive search firm serving the high-tech sector, Dave leads an elite, special forces recruitment team that extracts and secures the executive leaders that drive high-growth at venture capital and private equity-backed companies.

In 1997, Carvajal co-founded HotJobs.com and power-built the fledgling startup to 650 employees, $125 million in revenues, and a $1.2 billion market capitalization after its IPO. Dave then continued his success at TheLadders.com.

"I've seen Dave in action over the span of two decades building HotJobs, TheLadders and multiple high-growth companies that have financial backing from some of the top private equity and venture capital firms. He is an indefatigable force of nature,” said serial entrepreneur Alexandre Douzet, CEO and Co-Founder of TheLadders and the new startup reinventing subscription pet nutrition, Ollie. “There isn't anyone more qualified to be named 'Team Builder' because there isn't a headhunter out there more qualified than Dave to build the highest-caliber executive leadership teams. He used to be the best-kept secret in the NYC tech ecosystem." Together, Carvajal and Douzet built TheLadders to 400 employees and $82 million in revenues.

In the midst of the credit crisis of 2009, the headhunting industry was collapsing to a fraction of its size. In this turmoil, Carvajal founded Dave Partners as both a capstone venture and labor of love. Since its launch in 2009, Dave Partners has served as a key architect of the burgeoning New York City technology ecosystem.

About Dave Carvajal
As CEO of Dave Partners, Dave Carvajal is a sought-after headhunter, advisor and consultant to boards of directors, venture firms, CEO entrepreneurs and leadership teams of some of the most exciting growth companies in technology. Dave built HotJobs to 650 employees, $125M in revenues, IPO and $1.2B market capitalization as co-founder and then built TheLadders to 400 employees and $80M in revenues.