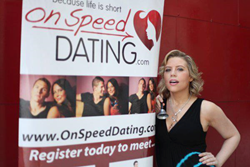 OnSpeedDating Co-Founder Amber Soletti Found Love Through Her Own Events.

With so many single professionals moving to Austin every single day, it made sense for this to be our next market.

NYC’s leading dating service, OnSpeedDating, is excited to announce its arrival in Austin this September.

With more than 100+ singles events “themed” around people’s dating “deal-breakers”--think physical preferences, political views, backgrounds, interests and more--OnSpeedDating will debut with Speed Dating for singles in their 20s and 30s. The event will take place at 7:30pm on Friday, September 30th at local watering hole, Draft Pick.

Also on the schedule is speed dating for singles in their 30s and 40s and their signature “Size Matter’s” event for women who prefer non-vertically challenged men 6’0” and taller.

The company actually enforces its very niche and specific dating criteria at events.
"At 'Size Matters,' we'll be measuring to ensure men are a legit six-foot and not rounding up from 5'9," explains OnSpeedDating Co-Founder Amber Soletti. "At 'Skinny Minny' we check women's clothing sizes to ensure they're a size 0-8. We do this for all of our events and it's one of the reasons we're so much better than online dating where people often lie and fudge their profiles."

At OnSpeedDating events singles are guaranteed a minimum of ten 3-minute "dates" or their next event is free. After each "date" the event host rings a bell signaling daters to rotate. Once all participating daters have met, the event concludes and singles are able to use the notes they took on their dating pamphlet to select matches on the OnSpeedDating website from the privacy of their home.

Friday, October 21st , OnSpeedDating will host “Beauty And The Geek," speed dating for women who like self-proclaimed, nerdy guys and "Boys Night" for gay men.

OnSpeedDating Co-Founder, Amber Soletti, is originally from Austin, Texas and started the popular dating service in NYC in 2008 in effort to subsidize her income and dating life. No longer single, Amber ended up meeting her partner of five years through her dating events. She and her beau recently moved back to Austin with hopes of bringing their "luck in love" to the Austin single scene.

“Everything is bigger in Texas, including the need to find a significant other,” says Soletti. “With so many single professionals moving to Austin every single day, it made sense for this to be our next market. Not to mention it was a good excuse for me to move home.”

Singles or all orientations can start registering for upcoming OnSpeedDating events today at OnSpeedDating.com.

About OnSpeedDating
Founded in September 2008, OnSpeedDating produces speed dating, singles parties networking events, and more, for singles of all orientations across Manhattan and Austin. What sets OnSpeedDating.com apart is its ability to foster personal connections through “niche” events themed around people’s dating deal-breakers; think physical preferences, political views, backgrounds, interests and more. Events are hosted weekly and admission fees run $25.00 to $40.00. OnSpeedDating is a subsidiary of OneStop Singles LLC, a privately held company with headquarters in Brooklyn and Austin, Texas. For upcoming singles events and more information visit OnSpeedDating.com.

"Beauty And The Geek" Speed Dating

Amber and her beau of 5 years