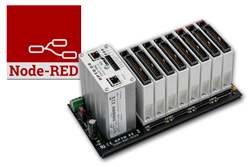 “I've been very impressed with the whole Node-RED project,” said Jim Turner, Senior Software Developer at Opto 22. “It's well run, polished, and of high quality, but still very practical and useful. It's been a pleasure to develop for their platform.”

Node-RED is an innovative visual wiring tool to connect edge computing systems such as industrial automation controllers to cloud services such as Amazon Web Services™ (AWS) IoT, IBM® Watson IoT, and Microsoft® Azure® in new and interesting ways. Created by Nick O’Leary (@knolleary) and Dave Conway-Jones (@ceejay) of IBM Emerging Technologies, Node-RED is an open-source, cross-platform technology available on GitHub.com and npmjs.org, and is currently available for a variety of platforms, including OS X®, Microsoft Windows®, Linux®, and Raspberry Pi™, and cloud offerings like IBM Bluemix® and AT&T® Flow. Built on the popular Node.js JavaScript runtime, Node-RED benefits from a large Node-RED library—containing over 500 prebuilt and ready-to-deploy nodes—allowing IIoT application developers to leverage existing software code and deploy it directly into their applications.

“I've been very impressed with the whole Node-RED project,” said Jim Turner, Senior Software Developer at Opto 22. “It's well run, polished, and of high quality, but still very practical and useful. It's been a pleasure to develop for their platform.” At the time of this release, Node-RED has been downloaded from npmjs.org over 25,000 times in the last month.

The Node-RED development environment offers a gradual and easily approachable learning curve for users of all levels and requires few to no programming skills. Instead, Node-RED takes advantage of preprogrammed, reusable code blocks called nodes. These nodes make IIoT application development simpler, easier to repeat, and faster to scale. Through a visual browserbased, drag-and-drop interface, Node-RED allows IIoT application developers to focus on identifying an opportunity and developing a solution, rather than building the components of an application from scratch.

Advanced JavaScript functions can also be created within the editor using a Function node. A built-in library lets developers save useful functions, templates, or node flows for re-use. The flows created in Node-RED are stored using the widely known JSON format, which can be easily imported and exported for sharing with other developers and applications, promoting the idea of social application development.

Opto 22 designs and manufactures industrial control products and Internet of Things platforms that bridge the gap between information technology (IT) and operations technology (OT). Based on a core design philosophy of leveraging open, standards-based technology, Opto 22 products are deployed worldwide in industrial automation, process control, building automation, industrial refrigeration, remote monitoring, and data acquisition applications. Designed and manufactured in the U.S.A., Opto 22 products have a worldwide reputation for ease-of-use, innovation, quality, and reliability. For over 40 years OEMs, machine builders, automation end-users, and information technology and operations personnel have and continue to trust Opto 22 to deliver high-quality products with superior reliability. The company was founded in 1974 and is privately held in Temecula, California, U.S.A. Opto 22 products are available through a global network of distributors and system integrators. For more information, contact Opto 22 headquarters at +1-951-695-3000 or visit http://www.opto22.com.