In 1945, the U.S. Second Cavalry liberated 400 prized Lipizzaner horses. Aptly dubbed "Operation Cowboy," the rescue is the focus of a new exhibit of the same name at the Cody Firearms Museum, complete with a unique shotgun that's integral to the story. 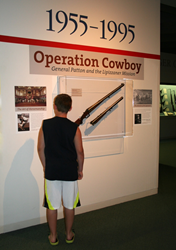 Due to Stewart’s bravery in crossing into Nazi territory, Patton awarded him a German Drilling shotgun....

Except, this story happened in the waning days of World War II—and it wasn’t the Wild West, but Czechoslovakia.

A new exhibit, "Operation Cowboy," is now on display at the Cody Firearms Museum (CFM) of the Buffalo Bill Center of the West and relates this remarkable story. In 1945, the U.S. Second Cavalry under General George S. Patton learned of a number of stolen Lipizzaner horses held captive by German lines in Hostau, Czechoslovakia. In addition to the hundreds of horses, there were also a large number of Allied prisoners of war (POWs). The exhibit tells of the Second Cavalry’s liberation of the horses and prisoners.

Located in the CFM’s military firearms section, the temporary exhibit focuses on this secret mission during the last days of World War II. Cody Firearms Museum intern, Rebecca Hoback, used the opportunity to tell this amazing story to the public.

“Operation Cowboy was successful because of the initiative of Intelligence Officer Thomas Stewart who assisted in persuading German troops to release hundreds of POWs and the prized horses,” Hoback explains. “Due to Stewart’s bravery in crossing into Nazi territory, Patton awarded him a German Drilling shotgun, which is now on display in this exhibit.”

The Lipizzan is one of Europe’s oldest breeds of horse, developed exclusively by the Hapsburg monarchy of Austria; the breed is closely associated with the Spanish Riding School of Vienna. There, the best of the horses continue the iconic ”Airs Above the Ground” movements of classical dressage—including highly controlled leaps and stylized jumps—even today.

A Lipizzaner stallion performs a levade during an open air performance of the South African Lipizzaner School.

Contact info for Buffalo Bill Center of the West-2016