Despite the extensive media attention received by Uber, AirBNB, and similar examples of the emerging sharing economy, 71 percent of all adult Americans report little familiarity with the sharing economy, according to a recent public opinion survey from the Insurance Research Council (IRC), a division of The Institutes. 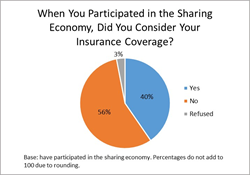 In addition to exploring levels of participation in the sharing economy, overall and by demographic subgroups, the report looks at respondents’ attitudes and expectations with respect to transportation-related and home-sharing arrangements. “The substantial number of people with little experience or familiarity with the sharing economy suggests tremendous growth potential in the years ahead,” said Elizabeth Sprinkel, Senior Vice President of the IRC.

The report, The Sharing Economy: Public Participation and Views, presents findings from an online survey conducted by GfK Public Affairs & Corporate Communications on behalf of the IRC. A total of 1,105 online interviews were conducted for the study, using a sample drawn from GfK’s Knowledge Panel. Interviews were conducting in December 2015. Survey data were weighted to the U.S. population of adults aged 18 and above. For more detailed information on

the study’s methodology and findings, contact David Corum at IRC(at)TheInstitutes(dot)org. For more information about how to purchase the report, visit IRC at http://www.insurance-research.org.

NOTE TO EDITORS: The Insurance Research Council is a division of the American Institute For Chartered Property Casualty Underwriters (The Institutes). The Institutes are the leader in delivering proven knowledge solutions that drive powerful business results for the risk management and property-casualty insurance industry. Institute knowledge solutions include the CPCU designation program; associate designation programs in areas such as claims, risk management, underwriting, and reinsurance; introductory and foundation programs; online courses; research; custom solutions; assessment tools; and continuing education (CE) courses for licensed insurance professionals and adjusters through its CEU.com business unit. The IRC provides timely and reliable research to all parties involved in public policy issues affecting insurance companies and their customers. The IRC does not lobby or advocate legislative positions. It is supported by leading property-casualty insurance organizations.