The single is included on the forthcoming studio album by Alex M.O.R.P.H., 'Not All Superheroes Wear Capes' (VANDIT). "We Are" is the collaborative effort of electronic dance music's most thrilling creators. 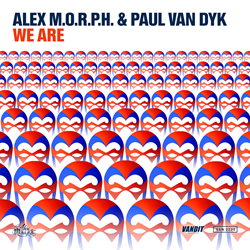 Here is a track to remind today’s EDM-saddled youth what quality electronic dance music really is and why so many people fell in love with this sound in the first place.

"We are not lost. We are not afraid. We are not filled with hate. We are the most technologically advanced civilization in human history and we will not be cowed by ignorance nor fear-mongering. We are loving. We are strong. We are one."

The time is right to join together in peace and humanity. “We Are” (VANDIT) is the new collaboration from trance kingpins, Alex M.O.R.P.H. & Paul van Dyk. “We Are” is out now.

The Original Mix of “We Are” kicks-off with a hard-hitting 4/4 beat and booming, low-end bass that makes bodies move. The energy and excitement of the track gradually build in layers as synthesizers stealthily enter with their minor-chord commotion until….bang! Melodic progressions of sunshine-filled synths arrive while distorted stabs add accent and the energy builds. By the time the bassline fully appears, listeners know they’re in for something exceptional. It’s a testament to Alex M.O.R.P.H. and Paul van Dyk and their innate skill at reading a crowd that the first big chord change utterly grabs one’s attention. Here is a track to remind today’s EDM-saddled youth what quality electronic dance music really is and why so many people fell in love with this sound in the first place. “We Are” is electronic dance music as it should be, at its purest and best. “We Are” unlocks something within the listener’s brain and commands the body to react in a reliably ecstatic way. The Radio Edit of “We Are” takes the essential elements of the original and boils them down into a tight package suited for radio.

Alex M.O.R.P.H. is a German DJ and producer best known for the sub-genre of electronic dance music known as trance. With almost 20 years in the business and more than 100 original productions and 130 remixes to his name, including, “An Angel’s Love,” “Sunset Boulevard” and “The Reason,” Alex M.O.R.P.H. has built a reputation characterized by authenticity and a passion for music. As a DJ, Alex M.O.R.P.H. has performed at numerous festivals, including, Trance Energy, A State of Trance, Ultra Music Festival and Electronic Family, and at iconic venues, including, Godskitchen, Madison Square Garden, Ushuaia Beach Club and Space. For over 12 years, M.O.R.P.H. has co-hosted his HeavensGate radio show and produced events of the same name. His Universal Nation radio show was launched in 2015.

One of the most beloved DJ/producers and electronic musicians of this generation, GRAMMY®-nominee Paul van Dyk is as respected by his peers as he is revered by fans. As a youth growing up in East Berlin before the fall of the Berlin Wall, van Dyk’s earliest musical influences came from listening to pirate radio and smuggled mixtapes originating from the West. Intoxicated by the forbidden sounds emanating from a world just beyond his grasp, van Dyk would years later be on an unstoppable path towards conquering every earthly continent as a widely admired creator of electronic dance music. His timeless anthems include such classics as, “For An Angel,” “The Other Side,” “We’re Alive,” “Tell Me Why (The Riddle),” “Nothing But You,” “I Don’t Deserve You,” “Time of Our Lives,” and many others. With six full-length studio albums and several mix compilations to his name, including the critically acclaimed Politics of Dancing series, van Dyk carves time to program and host his own VONYC Sessions radio show airing on FM and digital radio worldwide each week.

Established in 2000 by Paul van Dyk, VANDIT Records is a leading electronic dance music record label founded on the unwavering principle of artistic integrity. Today, VANDIT remains the “go to” imprint for electronic music connoisseurs. The philosophy of VANDIT follows that of its chief and founder: “No art without artists.”

Beatport two-week exclusive of Alex M.O.R.P.H. & Paul van Dyk, “We Are” (VANDIT), here: https://www.beatport.com/release/we-are/1835180
(The track will be available via all DSPs after September 16th.)