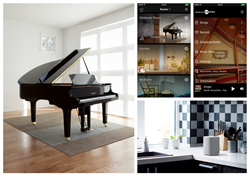 Now, the listener can leave the room and not have to miss a note of a brilliant piano performance, thanks to outstanding Yamaha multiroom audio technology. (Roger Eaton, Yamaha Corp.)

For the first time in its 316-year history, the venerable acoustic piano can now play beyond the four walls of a single room to any room in the home – even outside – thanks to powerful multimedia entertainment technologies introduced by Yamaha, the world’s largest musical instrument manufacturer, and a global leader in AV audio systems.

These converging technologies successfully link the new Yamaha Disklavier ENSPIRE, the seventh generation of the Disklavier reproducing piano family and the most advanced instrument of its kind, to the company’s highly acclaimed MusicCast wireless multiroom audio system.

Introduced in August 2015, the powerful wireless system seamlessly connects a growing roster of more than 30 MusicCast-enabled products – AV receivers, wireless speakers, sound bars and other audio components – all controlled by a simple, intuitive iOS or Android app. In addition to enjoying services such as Pandora®, Spotify, Rhapsody® and SiriusXM® Internet Radio through their MusicCast multiroom system, piano aficionados can link the Disklavier ENSPIRE to stream the piano listening experience, including full orchestrations, throughout the entire home, transforming any room into a concert hall.

“With the significant rise in popularity of whole home audio, it was only a matter of time that the piano would join the complement of entertainment services available to homeowners,” said Roger Eaton, chief marketing director, Yamaha Corporation of America. “Yamaha MusicCast significantly enhances the value proposition for the Disklavier ENSPIRE, enabling our customers to experience great piano performances anywhere in their homes, and control them right from their mobile device.”

For nearly 30 years, the Yamaha Disklavier has earned widespread accolades, not only as one of the finest acoustic pianos ever made, but also as the most popular, reliable and award-winning reproducing instrument in the world.

Yamaha has sold more Disklavier pianos than any other modern day reproducing piano manufacturer, largely due to the instrument’s perfect balance of fine craftsmanship, engaging sound, unrivaled multimedia capabilities and lifestyle versatility. Moreover, the instrument has been embraced by top schools worldwide for its unmatched educational and distance learning capabilities.

Unlike other reproducing pianos, the Disklavier is the only one that features DisklavierTV™, a subscription service capable of streaming live and on-demand, note-for-note piano performances from the stages of prestigious music events such as the Monterey Jazz Festival, Newport Music Festival, as well as by top artists including Sarah McLachlan and Elton John, directly to a Disklavier in the living room. As top artists and their ensembles perform in one location, their entire performance is streamed to Disklavier pianos throughout the United States – the remote instruments’ keys and pedals moving up and down to faithfully recreate the original artists’ performance, while a live video of the artists can be enjoyed simultaneously on a big screen television.

Further satisfying the growing needs of today’s multimedia family, the Disklavier can also be enjoyed or practiced upon in silence with headphones at the touch of a button.

Disklavier ENSPIRE represents a significant multimedia leap forward – the most advanced instrument of its kind, able to recreate original piano performances more accurately than any other reproducing piano on the market today. It boasts an unrivaled softwaresd library – from the finest piano solo performances, to thousands of pop, jazz and Broadway favorites – all available through the Yamaha MusicSoft online store. In addition, users can access their content through the MusicCast app, as well as stream music from the company’s Pandora-style Disklavier Radio service directly to the instrument.

The dynamically immersive music from both the Disklavier ENSPIRE and MusicCast wireless music technology opens up any room in the house to the industry’s most authentic sounding reproducing piano performances carried over networked MusicCast audio components and wireless speakers.

For incredible sounding performances in the main listening room, the Disklavier ENSPIRE can be connected to the new Yamaha WXC-50 wireless streaming preamplifier and WXA-50 wireless streaming amplifier to power a pair of speakers in the room. These play the accompanying music in clear, accurate quality, supporting the lead performance played on the Disklavier ENSPIRE piano. Just like that, the concert comes home to the living room as never before.

Want to take the enjoyment upstairs or out on the back deck? The Yamaha WXC-50 preamplifier can send a high quality digital piano sound with orchestral accompaniment from the ENSPIRE to compatible wireless speakers in remote rooms.

“The integration of MusicCast wireless multiroom audio capability in the Disklavier ENSPIRE marks yet another exciting example of Yamaha leveraging the power of its Keyboard and AV divisions to create a dynamic new concept in home entertainment,” added Eaton. “These instruments were already loaded with the most advanced features, functions and high quality sound in the world. Now, the listener can leave the room and not have to miss a note of a brilliant piano performance, thanks to outstanding Yamaha multiroom audio technology.”

Through the inclusion of MusicCast, the Yamaha Disklavier ENSPIRE continues to stand out as a “piano of unlimited potential”. With three system variations (CL, ST and PRO), Disklavier ENSPIRE is available in 14 models, 48” uprights and grand pianos ranging from 5’0” (DGB1K) to the flagship 9’ concert grand (DCFX). These instruments have recently begun shipping.

This MusicCast/Disklavier integration will require an app and firmware update, which will be available late 2016. For more information, about Disklavier ENSPIRE and MusicCast, please visit 4wrd.it/ENSPIREMUSICCAST