After months of being swamped on the airwaves by Hillary Clinton and her allies, Donald Trump’s campaign has launched a broad television advertising campaign that includes ads now running in nearly all battleground states. TV advertising expert Scott Kowalchek predicts the ads can help the GOP nominee win but only if Trump stops being Trump. 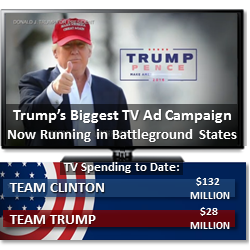 Donald Trump could become the political equivalent of Domino's Pizza

Donald Trump’s $10 million TV ad campaign - the mogul’s largest ad buy of the election - began this week in nine swing states, including Colorado, Florida, Iowa, Nevada, New Hampshire, North Carolina, Ohio, Pennsylvania and Virginia. Contrary to the theme of his previous, smaller-budget TV ads which focused on immigration, Trump's new ads profile him as a business leader who will strengthen the American economy if elected.

With Trump's big TV ad spend and his recent turn away from the more controversial issue of immigration, TV ad executive Scott Kowalchek predicts TV advertising may deliver the mogul to a higher standing in the polls and make the November election more competitive.

"Despite all the money Hillary Clinton’s camp has spent on TV ads, outspending Trump nine to one, the latest polls show that the margin between the candidates has narrowed. Now, the gap is small enough that national TV ads can make up the difference," said Kowalchek, founder of DirectAvenue, a TV media buying agency that manages national TV ad campaigns.

The latest poll, a 50-state survey by the Washington Post and Survey Monkey, found that indeed the gap appears to be closing. The 8 to 10 point lead Clinton enjoyed shortly after the party conventions ended a month ago is now about 4 points. Knowing the power of a well-produced political ad, Kowalchek believes Trump can bridge the 4 point gap, even though the election is less than nine weeks away. Can Trump's TV ads help him make up 4 points before Election Day? Said Kowalchek, “Absolutely; an inspiring TV commercial has turned around struggling brands in a matter of weeks. It could happen with Trump. He could become the political equivalent of Domino's Pizza.” Kowalchek is referring to the 2009 crisis at the pizza chain when two Domino's employees posted a prank video on YouTube implying that the chain’s pizzas are prepared in unsanitary conditions. The video caused a dramatic and immediate drop in business nationally. Domino's responded by not just addressing the false claims of the video transparently but also by reinventing itself, creating a new recipe, changing the crust, sauce, cheese, everything about the pizza.

The result: Within a few weeks, Domino's recovered, restoring confidence and public trust in its pizzas and even improving the company’s more than $2 billion in annual revenues. A TV ad campaign launched immediately after the crisis helped to restore the restaurant chain's fortunes.

Can Donald Trump reinvent himself in a similar way? The conservative tone of his new TV ads and his toned down, teleprompter-enabled speeches in recent days suggest that he may have succeeded in reinventing his brand, his personal recipe, and just in the nick of time to save his candidacy.

However, Kowalchek believes the mogul's penchant for spontaneous, controversial, and inflammatory rhetoric could ruin what may otherwise be a real chance to win the Presidency. "I like Trump's new commercials, they make him look Presidential," said Kowalchek. "Unfortunately, any momentum he gains through paid media could be wiped out with earned media, a breaking news story about a speech he makes or a Tweet he sends that gets Trump in trouble with women, African Americans, the disabled, or some other group of voters. He’s done it many times before. Now, with just a few weeks to go, Trump’s next major gaffe – if he has one – could seal his fate.”

Just as Domino’s Pizza reinvented its brand within a few short weeks to regain the public’s trust, Kowalchek would encourage Trump to stick with his new recipe through November and win the support of more voters as a result. If Trump strays off his prepared script, any support he gains could disappear with the speed of a Tweet or an off-the-cuff remark that becomes a viral video on YouTube. It’s a fact: in today’s digital world, with the phenomenal speed at which information spreads, an unflattering video or an unflattering news story can quickly topple a billion dollar pizza chain or a billionaire’s bid for the presidency….in 30 minutes or less.