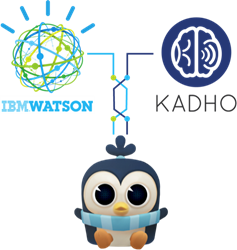 Kadho, Inc., that has launched a series of successful educational apps to teach children up to seven-years of age foreign languages has now partnered with IBM Watson to bring “Mochu,” an Al-based interactive toy, to market with an initial focus on launch in China. Mochu will initially help Chinese children learn English, according to Dr. Kaveh Azartash, CEO and co-founder of Kadho Inc.

Kadho, a “cognition training” company that has achieved great success with its neuro-science early learning language apps and software, has marked a new milestone in its short history with the development of the Mochu toy. It is the company’s first neuroscience-based and artificially intelligent toy designed to teach children to understand and speak a foreign language with great pronunciation.

Mochu was developed by Kadho Inc. in conjunction with IBM’s software entity, Watson. Last December, the two entered into a partnership agreement in order to bring an educational technology focused on Kadho’s English teaching curriculum to Mandarin-speaking children in China.

“Since that time, studies show that Mochu is a very entertaining and lovable toy,” explains Azartash, “one that is doing exactly what we had intended it to do: accelerate the language learning process.”

During its initial testing conducted in Beijing and Zhengzhou in China, Kadho partnered up with various Chinese educational institutes to better design the learning experience. The goal was to first establish a strong bonding between Mochu and the child and then introduce and motivate a child’s neuro-pathways to embed fundamental English sounds to help them learn English. By engaging with Mochu, a child’s developing brain is able to build the neural architecture for the English sound system (or other languages).

“We are pleased that we are now utilizing IBM Watson as a very powerful cognitive system, in conjunction with our own proprietary adaptive software, to bring an immersive learning experience to Chinese classrooms,” says Dr. Azartash. He went on to add, “I believe Mochu will revolutionize the English teaching ecosystem in China.”

Mochu has been in the R&D stage since 2014 when renowned linguists and scientists such as Dr. Noam Chomsky began to support Kadho’s Neurofoundation™ methodology—a platform geared to teach foreign languages to children. Since that time, Kadho has been working with neuroscientists and linguists from around the world and has published many studies that prove the efficacy of its methodology.

Mochu is also scheduled to hit the stores throughout China in early 2017, bringing the first and only artificial intelligence and neuroscience-based English teaching toy to the market. Educators, media and other interested parties are welcomed to experience a hands-on demo prior to launch.

IBM Watson: Watson is the first commercially available cognitive computing capability representing a new era in computing. Watson analyzes high volumes of data and processes information more like a human than a computer—by understanding natural language, generating hypotheses based on evidence, and learning as it goes.

As organizations work to make more data-driven decisions with 2.5 billion gigabytes of data being created every single day, they need advanced systems that are able to crunch massive amounts of structured and unstructured data and deliver actionable insights within seconds. Watson now powers new consumer and enterprise services in the health care, financial services, retail and education markets. IBM has also opened the Watson platform to developers and entrepreneurs, enabling them to build and bring to market their own powered-by- Watson applications for a variety of industries. http://www.ibm.com/watson/

Kadho, Inc: is a educational technology startup company co-founded by two neuroscientists from the University of California, Irvine and is currently incubated at EvoNexus. Dr. Kaveh Azartash and Dr. Dhonam Pemba founded their California-based corporation in 2014 which has rapidly gained widespread recognition by the world’s top scientists and educational institutes such as Montessori schools for their products. Kadho has worked with a team of linguists and scientists from Stanford, MIT, UCLA, and UCSD, since 2008, to develop its propitiatory Neurofoundation™ curriculum. Kadho is committed to combining neuroscience and technology through fun and interactive platforms so that children from around the world can learn to both understand and speak foreign languages with perfect pronunciation.; no accent. For more information please visit http://www.kadho.com