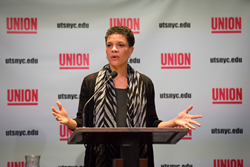 "I would like to imagine that a wide range of people of faith and conscience who sing songs from different keys may be able to join in a common chorus that shakes the foundations of our unjust political, legal and economics systems"- Michelle Alexander

“I am enormously excited and proud that Michelle Alexander is coming to Union,” said Rev. Dr. Jones. “I look forward to Michelle having the opportunity to further study faith traditions and their relationship to social justice. The entire Union community will benefit from her eloquent and steadfast commitment to stimulating profound national moral and social change grounded in diverse faith and religious traditions.”

As a Visiting Professor, Michelle Alexander will engage in directed study in consultation with Union faculty to provide her with a strong theological foundation for her work at Union and beyond.

“A very strong reason I am so attracted to the community at Union,” explained Michelle Alexander, “is that I believe the experience will enable me to clarify my spiritual beliefs, deepen my understanding of systematic theology, and expand my thinking about the possibilities for prophetic advocacy and movement-building across faiths, races, and cultures. I would like to imagine that a wide range of people of faith and conscience who sing songs from different keys may be able to join in a common chorus that shakes the foundations of our unjust political, legal and economics systems, and ushers in a new America.”

While at Union, Ms. Alexander will also research and release two forthcoming books. In Spring 2018, she plans to publish a personal reflection describing her journey from being a liberal civil rights lawyer who believed justice could be won through litigation and piecemeal policy reform to someone who now believes that a true revolution of values is required in this country – not simply a political revolution, but also a moral and spiritual revolution that will birth a new, more inclusive, compassionate and equitable America; and she will serve as primary editor of a book planned for Fall 2018, which will be organized as a collection of essays, sermons, speeches, and thought pieces from justice advocates and faith leaders from a wide range of backgrounds.

Ms. Alexander will co-teach the course, "Spirit of Justice: Towards an Interfaith Theology of Liberation,” challenging students to consider what it might mean to create a multi-racial, multi-ethnic, interfaith theology of liberation for this era of mass incarceration and mass deportation. She will also develop a podcast series exploring the themes developed in the course as well as a multimedia platform called FRED (Facing Race, Enabling Democracy) in partnership with RaceForward.

Michelle Alexander’s residency at Union Theological Seminary is made possible, in part, by the generous support of the Ford Foundation, Trinity Church Wall Street, The Jonathan D. Lewis Foundation, and Leslie and Clifford Hudson.

Michelle Alexander is a graduate of Stanford Law School and Vanderbilt University. In 2010, she published the acclaimed bestseller, The New Jim Crow: Mass Incarceration in the Age of Colorblindness. This remarkable book has helped bring awareness to the devastating impact that discrimination in our criminal justice system has on communities of color. As a social commentator and advocate, Michelle Alexander, who is also a Ford Foundation senior fellow, will use her time at Union to expand on her work educating others about the moral and spiritual crisis that is at the root of mass incarceration, shaping a new generation of religious leaders, scholars, and activists. In March 2015, Michelle Alexander delivered the fifth annual Judith Davidson Moyers Women of Spirit lecture at Union Theological Seminary.

Union Theological Seminary in the City of New York is a seminary and a graduate school of theology established in 1836 by founders “deeply impressed by the claims of the world upon the church.” Union prepares women and men for committed lives of service to the church, academy, and society. A Union education develops practices of mind and body that foster intellectual and academic excellence, social justice, and compassionate wisdom. Grounded in the Christian tradition and responsive to the needs of God’s creation, Union’s graduates make a difference wherever they serve.

Union believes that a new interreligious spirituality of radical openness and love is the world’s best hope for peace, justice, and the care of God’s creation. Empowered by groundbreaking inquiry aligned with practical realism and a bias for action, Union is charting a profound new course for enduring social change. Union graduates make a difference wherever they serve, practicing their vocations with courage and perseverance, and speaking clearly and acting boldly on behalf of social justice in all of its forms.