THIS LIGHT OF OURS: ACTIVIST PHOTOGRAPHERS OF THE CIVIL RIGHTS MOVEMENT Opens at Maltz Museum of Jewish Heritage in Cleveland, Ohio 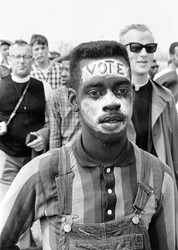 Though too young to vote, Bobby Simmons walked all the way to Montgomery, proclaiming proclaims his convictions on his forehead. (Selma—Montgomery, Alabama) ©1965 Matt Herron, Courtesy CDEA

Ordinary people risked everything to fight for equality in the segregated South of the 1960s . . . 50 years later, who will take up the challenge to right inequities that continue to spark anger across this country?

As relevant today as they were half a century ago, more than 150 black-and-white images chronicling the Southern Freedom Movement are featured in THIS LIGHT OF OURS: ACTIVIST PHOTOGRAPHERS OF THE CIVIL RIGHTS MOVEMENT, on view September 29, 2016 through May 14, 2017, at the Maltz Museum of Jewish Heritage (2929 Richmond Road, Beachwood, OH 44122; 216.593.0575; maltzmuseum.org). The 4,000-square-foot exhibition is generously sponsored by Cleveland Browns Foundation; Cleveland Foundation; Jack, Joseph, and Morton Mandel Humanities Center at Cuyahoga Community College; Cleveland State University; Milton and Tamar Maltz; PNC Bank and The Treu-Mart Fund.

THIS LIGHT OF OURS features works by nine activist photographers who documented the clash between institutionalized discrimination and determined resistance by activists and volunteers. “The power of photographs that helped catapult long-existing inequities into the national consciousness is undeniable,” asserts Maltz Museum executive director Ellen Rudolph. “Pain, fear and hope—the emotions and momentum fueling the movement—are palpable in these images.”

The Maltz Museum has added videos, interactive features and material about current tensions. “This exhibition is very timely,” says Museum co-founder Milton Maltz, noting its relevance to recent shootings, riots, vigils and protests in Baltimore, Charleston, Cleveland, Dallas and Milwaukee. “Ordinary people risked everything to fight for equality in the segregated South of the 1960s. The question this exhibition asks is, 50 years later, who will take up the challenge to right inequities that continue to spark anger across this country? How can we heal this open wound of racial division in America?”

“As a museum of diversity and tolerance, depictions of everyday people who stood up for justice fits perfectly with our efforts to encourage individuals to understand and accept their roles in ending intolerance and indifference," asserts the Museum’s education director Jeffery Allen. “It is as Cleveland’s own Rev. Dr. Otis Moss, Jr., a former regional director of Martin Luther King, Jr.'s Southern Christian Leadership Conference and a Selma march participant once put it, ‘If there is no conscience in the community, we have to be that conscience.’"

Recognizing racial divisions weren’t relegated to the South, THIS LIGHT OF OURS also includes content related to Northeast Ohio’s own turmoil and triumphs at this critical moment in American history. “During this same decade Cleveland experienced the Hough uprising of 1966, the long struggle to desegregate Cleveland's public schools,” notes Allen. “The region also witnessed the 1967 election of Carl Stokes as the first black mayor of a major American city and the groundbreaking role played by his brother, Louis, in the U.S. House of Representatives. Exhibition-related programming will be tied into community-wide commemorations of these milestones, examining their legacy in light of current events.”

For information, directions and related programming, call 216.593.0575, or visit maltzmuseum.org.

THIS LIGHT OF OURS: ACTIVIST PHOTOGRAPHERS OF THE CIVIL RIGHTS MOVEMENT (September 29, 2016 - May 14, 2017) In the 1960s, ordinary people risked everything to fight for equality. Featuring videos, interactives and 150+ black-and-white Civil Rights-era photographs, THIS LIGHT OF OURS offers a stirring look at inequities and tensions past and present, challenging visitors to play a role in effecting positive change. The Maltz Museum a proud partner in a year-long, community-wide commemoration being planned for the 50th anniversary of Carl Stokes’ 1967 election as mayor of Cleveland—the first African-American mayor of a major American city. Mayor Stokes and his brother, Congressman Louis Stokes, made a profound impact on the civil rights movement. For details on the celebration, visit stokes50cle.com. To learn more about the exhibition, visit maltzmuseum.org.

ADMISSION: THIS LIGHT OF OURS is included with Maltz Museum admission: $12 adults, $10 seniors (60+) and students, $5 youth (5-11) and free for Maltz Museum Members and children under 5. Groups of 10 or more are eligible for guided tours and a discount with advance registration.

EXHIBITION/MUSEUM HOURS: Tuesday – Sunday, 11am -5pm, Wednesday, 11am-9pm. The Museum is closed Mondays. (Note: The Museum recently changed its Saturday hours to open at 11am.)

GUIDED “DROP-IN” TOURS: Docent-led tours of THIS LIGHT OF OURS are available Tuesdays and Sundays at 2pm with regular Museum admission.

MALTZ MUSEUM OF JEWISH HERITAGE celebrates culture and identity to encourage connection and promote a greater appreciation of Jewish heritage and the diversity of the human experience. Personal stories of struggle, courage and creativity are brought to life through interactive exhibitions and thought-provoking programs generously supported by Cuyahoga Arts & Culture, the Jewish Federation of Cleveland and Ohio Arts Council. For more information, visit maltzmuseum.org and follow us on Twitter @maltzmuseum and @stopthehateUS.

After the Ku Klux Klan burned this cross in front of a Mississippi Delta Freedom House, a civil rights worker transformed it with a painted message. (Indianola, Mississippi)©1964 Tamio Wakayama, Courtesy CDEA