Real Smile dentist co-authors a compelling study on dental esthetics. Dr. Alex Rubinov and his findings ‘will make you smile’. 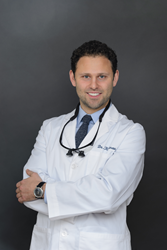 "The key is that, based on facial features and structures, you can alter the RED proportion as opposed to the golden proportion..."-Dr. Alex Rubinov DDS, MS.

Real Smile Dental, the family owned and operated dental practice in Cliffside Park, NJ has some exciting news to share! Dr. Alex Rubinov, a co-owner of the practice, has been featured in the Journal of Esthetic and Restorative Dentistry (JERD) for his research article. Published in Volume 28, Issue 2, Alexander Rubinov DDS, MS, alongside Mark L. Pitel DMD, and Kathleen M. Raley-Susman MS, PhD researched and co-authored the article based on a study that focused on RED.

RED (Recurring Esthetic Dental Proportion) is a hotly-contended topic in the world of dental esthetics. Simply put, RED is the mathematical equation dentists and dental surgeons use to plan out the intended widths for maxillary anterior teeth. Prior to this development, the well-known Golden Ratio (sometimes referred to as the Golden Proportion) acted as the industry leader for dental professionals.

Originally developed by Leonardo da Vinci in 1509, the Golden Ratio (1.62) suggested that abiding by such proportions would result in visual and aesthetic perfection. The theory of ‘dental esthetics’ expanded upon this idea, and broadened it to include dental proportions. In 1978, dental theorist Edwin Levin argued that following the Golden Ratio would be the most useful mechanism for planning and implementing restorative dental treatment.

Later theories, such as that argued by Dr. Daniel Ward, countered this conjecture. Ward argued that there was a better, more holistically-appropriate proportion than the Golden Ratio that should be used for dental restorative treatment: the RED Proportion (.70).

The study, and later article, published by Dr. Rubinov and his colleagues, aimed to communicate two major points. Firstly, the article sought to confirm Ward’s argument that dental professionals abide by the RED Proportion, and not the Golden Ratio, as previously thought. Secondly, the study uncovered some interesting conclusions to include not only dental professionals, but also laypersons, or patients.

Oftentimes, it is difficult to be sure that what the general public wants, and what an industry professional, or highly-trained individual (such as a dentist) wants, are aligned. Industry professionals might recommend certain measures or treatments based on their levels of expertise, but from an esthetic perspective, these recommendations do not always align with the less-trained eye. Preferences might not coincide; although looks are subjective in nature, scientific research and properly-performed studies can help alleviate discrepancies. This study did exactly that, and resulted in the most conclusive conjecture about professionals and laypersons’ opinions regarding dental-facial structure. They are aligned; in this case, the doctor (Dr. Rubinov) truly does know best!

To read the full study, go to JERD. For more information on Real Smile Dental, or to schedule your appointment today, visit http://www.RealSmile.com.