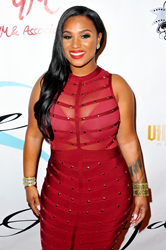 R&B artist Aunyae Heart celebrated the debut of "Deep End" on Sept. 8 at an exclusive music single release event in Hollywood, which turned into a smashing success. The special event was accompanied by a live performance from Heart and hosted by R&B artist Mali Music, an R&B standout who was part of BET’s Music Matters series. Following the success of her release event, Heart is now focusing her energy on completing her first EP, to be released in Spring 2017. She is returning to the studio with her Grammy-winning team Carlos Battey of Jackie Boyz and Grammy-winning producer Phillip “Aphillyated” Guillory as she finalizes her album.

"I was thrilled with the turnout of my release event for 'Deep End' and to have so many talented people support all of my hard work," Heart said. "My upcoming album will be another testament to my dedication to music and entertaining my fans. Working with Carlos and Aphillyated was truly inspiring and left a lasting impression," she said.

Born Alicia Aunyae Williams in St. Louis, Missouri, Heart is a trifecta as an R&B singer who also writes, produces and arranges her music. Heart, who auditioned twice for "The Voice," has been gaining attention with the release of her new single “Deep End”. Heart’s talent earned her the opportunity to open for artists and musicians such as Macy Gray, Mint Condition, George Clinton, as well as a duet with Walter Williams of the O'Jays. Some of her career highlights include singing at the BET Music Matters event in New York and working with producers Rico Love and Da Beatstaz.

To watch the official music video for “Deep End” on YouTube, visit https://www.youtube.com/watch?v=lQ3DZ8GAoOs

Heart is managed by Nicole Bradley of Victorious Management and may be reached at victoriousm4u(at)gmail(dot)com.

I feel blessed and truly honored to have worked with Carlos and Aphillyated on my new single "Deep End". They are world-class talents and true visionaries," Aunyae Heart said.

Nicole Bradley - R&B Artist Aunyae Heart is managed by Nicole Bradley of Victorious Management and may be reached atwww.victoriousm4u@gmail,com

Carlos Battey joins Aunyae Heart on stage while she performs. "Excitement and joy I feel knowing that 'Deep End' is finally released for all of my fans to enjoy". - Aunyae Heart