Baltimore's Nicole Cooper, a survivor of pulmonary hypertension, encourages others to seek support at unique PHA on the Road event. 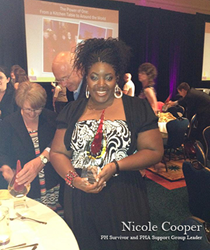 “I immediately started feeling very short of breath and very faint, I could barely speak. The nurse got me a wheelchair where I collapsed. In that short amount of time the blood clots had moved to both of my lungs.”

Baltimore’s Nicole Cooper knows first-hand that pulmonary hypertension (PH) awareness is a matter of life or death. Cooper, a survivor of the rare, progressive and often misdiagnosed disease, heads a PH support group, one of more than 275 supported by the Pulmonary Hypertension Association (PHA). Working with members of the group, she’s urging people to attend PHA on the Road: PH Patients and Families Education Forum, a free day-long program, Oct. 1 at the Grand Hyatt Washington.

Like too many PH patients, Cooper’s diagnosis almost came too late. Since symptoms include shortness of breath, fatigue and chest pain, PH is often misdiagnosed as asthma or other less threatening illnesses. With little public awareness about the disease, many sufferers go months, sometimes years, believing they have something other than PH. Without treatment, the average length of survival for the progressive disease is only 2.8 years after diagnosis. However, with early and accurate diagnosis, PH treatments can extend and improve the quality of life for many.

PHA on the Road provides patient, caregivers and families with networking, support and opportunities to meet medical professionals who specialize in PH. The forum is open to people diagnosed with PH, those who have PH symptoms and people with associated diseases who are at greater risk for developing PH.

PH, or high blood pressure of the lungs, is a rare and life-threatening disease resulting from the tiny arteries in the lungs becoming narrowed or blocked. The increased pressure on the lungs forces the right side of the heart to pump harder to move blood through the arteries. This can lead to heart failure and death.

While in some cases, there’s no known cause for PH, the disease can be associated with coronary artery disease; systemic high blood pressure; autoimmune diseases; HIV; sleep apnea; sickle cell anemia; liver disease; and other conditions.

Cooper herself discovered that PH can be caused by blood blots in the lungs. This condition is known as Chronic Thromboembolic PH or CTEPH, which unlike other forms of PH that have no cure, can be reversed with a surgery called Pulmonary Thromboendarterectomy Surgery, or PTE, to remove the blood clots blocking the tiny arteries in the lungs.

Eight years ago, when she was in her best physical shape ever, Cooper suffered from an excruciatingly painful cramp in her left calf that sent her to the emergency room. Doctors soon discovered blood clots and admitted her on the spot.

“I immediately started feeling very short of breath and very faint, I could barely speak,” said Cooper. “The nurse got me a wheelchair where I collapsed. In that short amount of time the blood clots had moved to both of my lungs.”

After treating her with blood thinners and discharging her with a prescription to continue taking them, Cooper’s health continued to decline. Months later, she was diagnosed with hypertension. She took high blood pressure medication for two years until, finally, a pulmonologist sent her to have an echocardiogram and a six-minute walk test, the first screenings for PH.

The tests confirmed the pulmonologist’s suspicion. “He gave me six months or less to live,” Cooper said.

Soon after receiving her diagnosis, Cooper landed at the University of Maryland where a PH specialist put her on a combination PH therapy. The doctor told Cooper about the University of California San Diego Medical Center, where she would soon undergo the potentially life-saving PTE surgery.

“My lung pressure started out at 136,” Cooper said. “After surgery it’s now at 39. I’m not cured of PH 100 percent, but I’m breathing better and living life to the fullest!”

PHA on the Road PH Patients and Families Education Forum