CARF International Celebrates 50th Anniversary by Honoring its Many Influencers

The independent, nonprofit accreditor shares its perspective and gratitude following a half century of enhancing lives and services 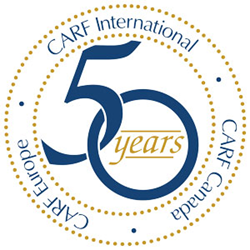 The international accrediting body CARF International marks its 50th anniversary of business today, September 27, 2016. CARF was incorporated in 1966 to create a private standards-application mechanism for the medical and vocational rehabilitation fields in North America. Over the ensuing 50 years, CARF expanded to serve a wider health and human service continuum globally, including aging services, behavioral health, child and youth services, and opioid treatment. Today, CARF has five offices in three countries and accredits more than 50,000 individual programs around the globe.

Over the past year, CARF has been showcasing the many partners—service providers, persons served, surveyors, and membership/advocacy organizations—that contribute to or support its vision to improve the quality of life of persons served. Many of these efforts are viewable on CARF’s website at http://www.carf.org/anniversary, and CARF invites readers to share and participate. Items include an ongoing artwork display with submissions from some of the eight million persons served annually by CARF-accredited providers, a list of recognition letters received from industry associations and governmental sources, an interactive historical timeline, and a guestbook. CARF has also published a series of articles that explore the following areas for which it offers accreditation: aging services, behavioral health, child and youth services, employment and community services, and medical rehabilitation. The series can be viewed at: http://www.carf.org/50thAnniversaryBlog. Finally, CARF will be publishing a 50th anniversary commemorative cookbook with more than 200 recipes submitted by CARF staff and surveyors. All proceeds go to organizations whose purpose is to alleviate human hunger.

In a joint statement released in January, CARF’s board, executive team, and staff members said, “This year is a period for us to reflect and take stock of what we have done and what needs to be done in the coming years. To all our customers, stakeholders, and friends—thank you for your continued commitment to CARF accreditation. We look forward to the next 50 years and to making a lasting impact around the globe.”

In 50 years, CARF has grown from accrediting programs at four providers in the United States, to more than 7,000 providers worldwide. As a testament to the consistent relevancy of the standards, two of the original four providers have maintained continuous accreditation and still offer CARF-accredited programs today. Those providers are TIRR Memorial Herman in Texas, and Vocational Guidance Services in Ohio. CARF considers the relevancy and longevity of its standards to be a reflection of the input and support from the many people and organizations being honored during the anniversary celebrations.

The first CARF standards in 1966 were developed through the collaborative efforts of two leading professional associations at the time—the Association of Rehabilitation Centers (now known as the ARC) and the National Association of Sheltered Workshops and Homebound Programs—to create nongovernmental quality standards. To provide governing oversight, a nine-member board of trustees was assembled, which included representatives from the organizations now known as Goodwill Industries and Easter Seals. Goodwill and Easter Seals have also maintained association with CARF over the past 50 years. They are now part of CARF’s International Advisory Council (IAC – http://www.carf.org/IAC) along with 40 other organizational and five individual members—representing interests across the spectrum of health and human service industries—who provide guidance and insight during CARF’s standards development processes. Today, CARF is governed by an 11-member Board of Directors (BOD) that also represents a broad range of expertise and specialties. “CARF’s commitment to maintaining relationships with the diversity of organizations and individuals represented on the IAC and BOD demonstrates CARF’s vision to serve as a catalyst for improving the quality of life for persons served,” says Cindy Johnson, CARF’s chief resource officer.

In 1969, CARF accredited its first program outside of the United States when St. Michael’s Hospital in Vancouver earned accreditation. With programs recently becoming accredited for the first time in the Far East, Middle East, Oceania, and South America, CARF has continued to expand into and share its standards with a global population. Of the expansion, Darren Lehrfeld, CARF’s chief accreditation officer, says, “CARF’s ability to promote improvement in the delivery and outcomes of health and human services around the world is owed to the dedication of its peer surveyors. Surveyors act as consultants in the field and make the exchange of ideas and best practices possible.” CARF’s surveyor cadre currently numbers more than 1,300 surveyors globally.

“CARF’s success is possible because of its longstanding history of engaging specific populations served and key stakeholders,” says Brian J. Boon, President/CEO. “Continued input from our stakeholders allows us to maintain internationally recognized quality standards and keep the focus on our mission, which is enhancing the lives of persons served. During our 50th anniversary, we want to be sure to highlight and thank these groups.”