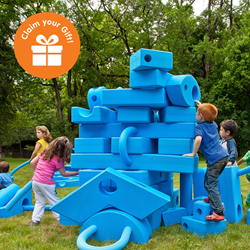 There is a growing global awareness of the many ways creative play aids in child development—problem-solving, collaboration, and language skills, for example. This has translated into a growth in the number of schools that want Imagination Playground.

According to Imagination Playground President and CEO, David Krishock, the decision to re-run the Gift of Play program this fall came in response to 582 schools who said they were waiting for the return of last year’s unprecedented offer.

“There is a growing global awareness of the many ways creative play aids in child development—problem-solving, collaboration, and language skills, for example. This has translated into a growth in the number of schools that want Imagination Playground for their students. These schools—our partners—are asking for our help,” said Krishock.

Painted Desert Montessori Academy in Buckeye, Arizona was among the first schools this week to benefit from the renewed offer. Frank Yanez, the school’s founder said, "We are the first public Montessori charter in the West Valley of Phoenix. Our focus is on opening up children’s minds to think and be creative, and the blocks are going to get them do that. Your help made all the difference in the world!”

Kellie Kalberer of Royal Oaks Elementary, commented similarly, saying, “We’ve kept our eye on these blocks, and with this special pricing we can finally make it happen—thanks Imagination Playground—the children will love them!”

Imagination Playground’s company mission is to help children become more involved in purposeful, child-directed play. At the beginning of 2016, the company set a new goal to get 3 million more kids playing. Having already reached 2,121,000, Imagination Playground believes their renewed Gift offer will enable them to reach their goal by the end of the year.

Expressing his excitement, Krishock said, “We believe we have over 1,000 friends globally that would benefit from this special opportunity – and that translates to close to 3,000,000 children playing!”

He concluded by saying, “Nothing is more important to us than helping your children play, grow, and learn. So call us today. I personally guarantee you’ll get the help you need.”