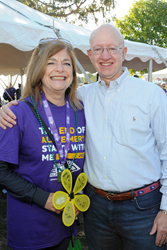 Welch Group employees pledged their support for the Alzheimer’s Association during the recent 2016 South Shore Walk to End Alzheimer’s held at Pilgrim Memorial State Park in Plymouth, MA. More than $10,000 in support came from the Welch Group, including the company’s $2,500 Promise Garden sponsorship. The top Welch Group team fundraisers were from the senior living community, Village at Proprietors Green in Marshfield, MA, raising more than $6,400.

Retta Dwyer, program assistant at Village at Proprietors Green, which offers independent living, assisted living, and assisted living memory care, was awarded a Grand Champion Medal for personally raising $3,765 – nearly double what she raised last year. Dwyer has had many loved ones affected by Alzheimer’s disease and said she was determined to “no longer be on the sidelines.”
Each year more than 1,100 people participate in the annual Walk.

Locally, more than $280,000 had been raised as of the day of the event. The Alzheimer’s Association Walk to End Alzheimer’s®, held annually in more than 600 communities nationwide, is the world’s largest event to raise awareness and funds for Alzheimer’s care, support, and research. The Welch Group team from Allerton House Assisted Living at Harbor Park in Hingham raised $1,185. Additionally, the Welch Group once again served as a $2,500 Promise Garden Sponsor along with Volta Oil.

Alzheimer’s disease is the sixth leading cause of death in the United States and more than five million Americans are living with the disease. Nearly 15 million family members are caring for a loved one with the disease, according to the Alzheimer’s Association.