Let's Indict Trump is offering all Americans a fun way to show their disdain for Donald Trump! 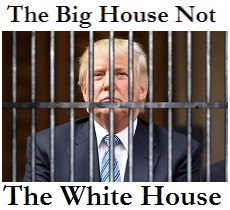 Spokesperson Jim Polichak says that “Let's Indict Trump is seeking at least One Hundred Thousand Americans to support and join the petition drive asking New York State Attorney General Schneiderman to convene a grand jury to decide if Donald Trump and his business partners have created a pattern of criminal activity and criminal enterprise by profiting from decades of Trump’s pledges of profits and proceeds to support to a host of charities.” Mr. Trump's frequent unfunded pledges to charities have been exhaustively examined by David A. Fahrenthold of the Washington Post and covered by the media world-wide. If proven these allegations are serious felonies that fall under New York State Racketeering laws {RICO}.

Mr. Polichak urged all Americans to "Remember this summer’s Republican Stop Trump Movement? Had Mitt Romney and the others been serious about forcing the Republican Convention to nominate a different candidate they could have convinced a few of the twenty-eight members of the Republican Attorneys General Association to have charged Trump with a series of felonies then passed a rule requiring that the Convention disallow any person charged with multiple felonies from consideration for national office."

Mr. Polichak also said that “Since Romney didn’t, it’s time for the American public to step up and demand that Trump be held accountable at least once in his lifetime.”

The Petition:
Attorney General Schneiderman, please immediately convene a grand jury to decide if Donald Trump’s false pledges to donate profits and proceeds “out of his own pocket” to charities to induce goodwill and convince consumers to purchase his products and watch his television shows created a pattern of criminal activity and criminal enterprise by Trump and his business partners. Let the grand jury decide if Mr. Trump’s false pledges provided him decades of profits, thereby violating Racketeer-Influenced and Corrupt Organization (RICO) laws. Since Trump directed most of this activity from his corporate headquarters and 30 Rockefeller Plaza, New York City, New York State should lead the investigation of Trump's false claims under New York Penal Law Article 460.