Eliminating poverty is a delusion 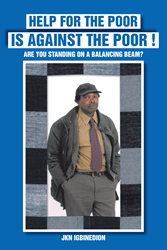 Everyone is vulnerable, and unfortunately, current remediation efforts are not only unrealistic, but sustain the issue.

There are thousands of programs and organizations claiming to help the poor. Yet many cannot even define what it means to be poor. While most of these organizations are truly trying to help and make a positive impact with their efforts, JKN Igbinedion suggests they are instead invoking a cycle of poverty.

In his new book “Help for the Poor is Against the Poor,” Igbinedion provides commentary and analysis highlighting how the plight of poverty is not only real, but growing in severity. Igbinedion suggests that efforts aimed at eradicating poverty are delusional, and focus should instead be placed on improving human conditions.

“Poverty exists in every endeavor, in every establishment and institution worldwide,” Igbinedion said. “Everyone is vulnerable, and unfortunately, current remediation efforts are not only unrealistic, but sustain the issue,”

Igbinedion argues that until human behavior is changed, there will not be any true victory in improving conditions or lessening the plight of poverty. Greed and corruption top Igbinedion’s list of attributes responsible for poverty.

“Greed and corruption are part of human nature, but we must push against them,” Igbinedion said. “People who give into such behavior must be held accountable. This includes politicians who make false promises, corporations that prey on the poor, the frivolous position of the United Nation organization and even those currently impoverished who give into vices. Behavioral changes and accountability are the only true hope at weakening the plight of poverty.”

“Help for the Poor is Against the Poor” strives to encourage readers to eliminate any behaviors that contribute to the plight of poverty and consider new approaches to improving human conditions.

“Help for the Poor is Against the Poor”
By JKN Igbinedion
ISBN: 978-1-4918-7328-1
Available in hardcover, softcover and e-book
Available on Amazon, Barnes & Noble and AuthorHouse