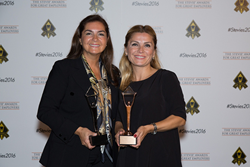 Stevie Awards for Great Employers winners were announced on Friday, September 30 in NYC

Gold, Silver, Bronze, and Grand Stevie Award winners were announced at a gala awards banquet at the Marriott Marquis in New York City.

Winners in the 2016 Stevie® Awards for Great Employers, an international competition, were announced on Friday, September 30. The awards recognize the world’s best employers and the human resources professionals, teams, achievements and HR-related products and suppliers who help to create and drive great places to work.

Gold, Silver, Bronze, and Grand Stevie Award winners were announced at a gala awards banquet at the Marriott Marquis in New York City.

Stevie Award winners in 34 Employer of the Year categories were determined by a unique blending of the ratings of professionals and the votes of the general public. More than 44,000 votes were cast by members of the public for their favorite employer. The most voted-for nominee, Coveo (USA), won the Grand Stevie Award for Highest-Scoring Nomination in the competition, as well as the Gold Stevie for Employer of the Year – Computer Software – up to 250 Employees.

More than 250 nominations from organizations around the world were evaluated in this year’s competition. Winners were determined by the average scores of more than 50 professionals worldwide, acting as judges. The Stevie Awards for Great Employers recognize achievement in many facets of the workplace. Categories include:

Complete information about the program are available at http://www.StevieAwards.com/HR. Entries for the 2017 edition of the competition will open in March.