The Group of Thirty today released Oil and the Global Economy, a paper by Abdlatif Al-Hamad and Philip Verleger, Jr. 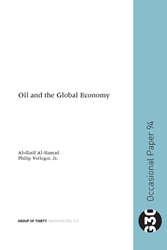 The Group of Thirty today released the paper, Oil and the Global Economy. The paper is the newest addition to their Occasional Paper series.

The paper includes two perspectives from Abdlatif Al-Hamad, Director General and Chairman of the Board of Directors of the Arab Fund for Economic and Social Development, and Philip Verleger, Jr., president of PKVerleger LLC and a Nonresident Fellow of the Payne Institute for Earth Resources at the Colorado School of Mines, Golden, Colorado.

Al-Hamad discusses the many challenges facing the oil industry in the Middle East and North Africa (MENA), noting that the present oil price cycle is driven by an increase in oil production in the United States made possible by the technological advances of extracting shale oil. He argues that the current price cycle has highlighted the dependency of oil-exporting nations on the commodity as they now struggle to balance their budgets to fund social spending and transfers. Al-Hamad therefore argues that “it is crucial for the countries of the region to strengthen the immunity of their economies against the vagaries of oil markets” considering the recent social and political instability in the region.

Jean-Claude Trichet, Chairman of the Group of Thirty, welcomed the paper. “We are pleased to add this paper on oil to our Occasional Paper series. It is clear that this crucial industry is facing many challenges on many fronts and it is important to discuss the possible effects on consumers, producers, and the global economy as a whole.”