The National Museum of Mathematics launches latest "Math/Art" exhibit: "The Insides of Things The Art of Miguel Berrocal" October 13, 2016- February 28, 2017 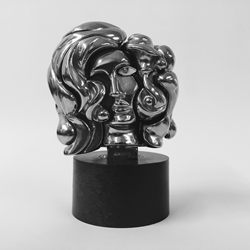 “We are delighted to present the work of brilliant artist Miguel Berrocal at MoMath,” Cindy Lawrence. “I imagine that he would be delighted that his artwork is being viewed by people of all ages and background, in the context of a mathematics museum.”

On Thursday, October 13th, the popular National Museum of Mathematics (MoMath), which has brought the fun, beauty, and intellectual excitement of math to more than a million people of all ages in New York and the world since its opened four years ago, will debut The Insides of Things: The Art of Miguel Berrocal. The Museum’s newest Math/Art Exhibit will showcase the masterful craftsmanship of the award-winning Spanish figurative and abstract sculptor, Miguel Ortiz Berrocal (1933-2006). Featured in the Museum’s Composite Gallery, this groundbreaking exhibit, which runs until the end of February 2017, allows visitors to construct and disassemble a replica of a Berrocal sculpture as well as view almost a dozen three-dimensional Berrocal puzzles while discovering a unique connection between art and math.

Artist Miguel Ortiz Berrocal is recognized as a master of “burr puzzles” (three-dimensional puzzles), but his works are also uniquely acknowledged as being a combination of visual beauty, tactical pleasure, humor, and intellectual stimulation. Berrocal’s burr sculptures are also known for the miniature artworks and jewelry incorporated into or concealed within them, and because some of the sculptures can be reassembled or reconfigured into different arrangements. The Spanish artist’s sculptures span a wide range of physical sizes from monumental outdoor public works, to intricate puzzle sculptures small enough to be worn as pendants, bracelet, or other body ornamentation. His works have been exhibited widely throughout Europe, North and South America, and Japan.

The Insides of Things: The Art of Miguel Berrocal at MoMath will feature an interactive replica of the artist’s Portrait de Michele, as well several Berrocal works: the Goliath puzzle, the Richelieu, the Mini Zoraida, the Mini Maria, La Mini Cariatide, Caballo Casinaide, Cristina, the Mini David, the Manolete, and the Romeo e Giuliette.

“Burr puzzles are three-dimensional toys that challenge the puzzler with the task of disassembly and reassembly.  In an interesting burr puzzle, each piece has its range of motion restricted by the structure formed by remaining pieces, making it so there is a particular sequence in which pieces must be maneuvered — or even collections of pieces that must be maneuvered in concert — in order to solve the puzzle,” explained Cindy Lawrence, Executive Director of MoMath.  “Many burr puzzles are quite old and have highly symmetric, geometrically-inspired assembled forms.  Since a given form might give rise to a puzzle in different ways, mathematicians spend considerable time pondering how many variants of a given puzzle might exist and what makes one variant more interesting or difficult than another.”

“We are delighted to present the work of brilliant artist Miguel Berrocal at MoMath,” added Lawrence. “I imagine that he would be delighted that his artwork is being viewed by people of all ages and background, in the context of a mathematics museum.”

Also presented for viewing in the Composite Gallery will be four original instruction manuals that complement some of the Berrocal puzzles in the exhibit.

The Inside of Things: The Art of Miguel Berrocal is made possible by a donation of the late Mr. Samuel Sensiper’s Berrocal collection to the National Museum of Mathematics, along with the additional support of Michele and Stan Rosen.

About the National Museum of Mathematics
The National Museum of Mathematics (MoMath) strives to enhance public understanding and perception of mathematics in daily life. Since it opened in December 2012, more than 1 million people of all ages in New York, across the United States, and in Singapore, Brazil, Germany, Russia, Spain, the UK, and Sweden have experienced the fun, beauty and intellectual excitement of MoMath.

The only math museum in North America, MoMath fulfills an incredible demand for hands-on math programming, creating a space where those who are math-challenged – as well as math enthusiasts of all backgrounds and levels of understanding – can revel in their own personal realm of the infinite world of mathematics through more than 37 unique state-of-the-art interactive exhibits. MoMath was awarded the bronze 2013 MUSE Award for Education and Outreach by the American Alliance of Museums.

Location:
MoMath is located at 11 East 26th Street on the north side of popular Madison Square Park in Manhattan.