With $2.7 million in funding through the U.S. Department of Energy's APRA-E GENSETS program, Air Squared will lead a four-institution team in development of a combined heat and power system that could bring clean energy to your house at one-eighth the cost. 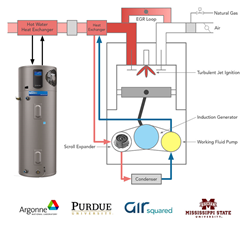 Creating a system that can work with a smaller generator powered by natural gas would make mass production viable, reduce costs and eliminate the need to interface with the grid system.

Cheaper, cleaner power for your home could be on the near horizon. With the support of a U.S. Department of Energy (DOE) grant, a team of four institutions thinks that within three years they can bring energy efficiency to your house at one-eighth the cost.

CHP systems use a waste-heat recovery system and one power source, such as a natural gas generator, to produce all of the heating, cooling and electrical power that a building needs. Commercial buildings use CHP to increase energy efficiency by avoiding the transmission and distribution losses that occur when electricity travels over power lines, and by capturing more of the energy output from natural gas through waste-heat recovery. Additionally, CHP systems remove the need to worry about power loss from grid outages or mandated rolling blackouts during peak use times.

Today’s CHP systems operate on large 4 or 5 kilowatt-sized generators, requiring them to connect to the main utility grid system to offload excess power, and can cost $25,000 to $30,000.

Creating a system that can work with a smaller generator powered by natural gas would make mass production viable, reduce costs and eliminate the need to interface with the grid system.

In addition, the team says its novel home utility system will be more efficient and longer lasting than residential CHP systems on the market. Today’s systems operate at about 26 percent efficiency, and ARPA-E has set a goal of increasing efficiency to 40 percent or more.

“It’s going to be something totally new,” said Munidhar Biruduganti, a principal research engineer at Argonne. “We want to shoot for an output of one kilowatt, not five kilowatts, so that all the power is used by the home.”

The team will develop the new system in two parts, with efforts led by scroll technology expert and equipment manufacturer Air Squared, Inc.

Air Squared will partner with Purdue University to build an organic Rankine cycle system to capture waste heat and turn it into electricity. The generator is projected to cost one-third of existing systems through improvements in fluid mixture and the addition of a novel oil-free scroll expander.

“Using organic Rankine cycle technology to recover the waste heat of the engine exhaust will allow us to boost overall thermal efficiency by up to six percent, getting us closer to the 40 percent goal,” said Eckhard A. Groll, Reilly Professor of Mechanical Engineering, Ray W. Herrick Laboratories, at Purdue University.

Groll added, “Organic Rankine cycle technology has been proven in larger applications, such as geothermal heat recovery. However, the challenge of the current project lies in the miniaturization of the technology for application in a one-kilowatt power output engine.”

The two components will be coupled in the second year of the three-year project and undergo system-wide testing at Argonne. In the final year, Air Squared will put the new system through durability testing.

The award is one of three given out as part of the Generators for Small Electrical and Thermal Systems’ Small Business Innovation Research (SBIR) and Small Business Technology Transfer (STTR) initiatives funded by ARPA-E.

ABOUT AIR SQUARED
Air Squared is the industry leader in oil-free scroll design and manufacturing. By introducing a simple design with fewer moving parts, scroll technology has established itself as a highly efficient, very reliable, cost-effective alternative. Through a growing line of compressors, vacuum pumps, and expanders, Air Squared makes the many advantages of oil-free scroll technology available to OEMs worldwide.

ABOUT ARGONNE NATIONAL LABORATORY
Argonne National Laboratory seeks solutions to pressing national problems in science and technology. The nation's first national laboratory, Argonne conducts leading-edge basic and applied scientific research in virtually every scientific discipline. Argonne researchers work closely with researchers from hundreds of companies, universities, and federal, state and municipal agencies to help them solve their specific problems, advance America's scientific leadership and prepare the nation for a better future. With employees from more than 60 nations, Argonne is managed by UChicago Argonne, LLC for the U.S. Department of Energy's Office of Science.

This material is based upon work supported by the Department of Energy’s ARPA-E GENSETS program under the topic: A High-Efficiency SACI 1 kW Generator System with Integrated Waste Energy Recovery. Any opinions, findings, conclusions, or recommendations expressed in this material are those of the author(s) and do not necessarily reflect those of the Department of Energy or ARPA-E.