Pit bull victim groups align with advocacy website NationalPitBullVictimAwareness.org to raise awareness and prevent maulings. The initiative, sponsored by Daxton's Friends for Canine Education and Awareness, seeks to call attention to the scope and severity of this urgent public safety issue. #PitBullVictimAwareness 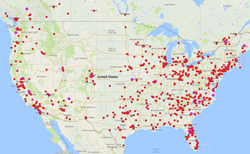 Breed-specific legislation, when properly written and enforced, is the most effective way to prevent serious canine-related maulings and fatalities.

A North American coalition of over 70 groups concerned about the growing pit bull crisis is organizing the third annual National Pit Bull Victim Awareness Day on October 22, 2016. The day is intended to honor victims of pit bulls and call attention to the severe injuries and deaths caused by pit bull-type dogs in the United States and Canada.

In 2015, pit bulls caused 73% of the record 45 fatal dog attacks on people in the US and Canada despite comprising less than 6% of the dog population, as reported by Merritt Clifton, Editor of Animals 24-7.

National Pit Bull Victim Awareness (NPBVA) evolved out of the need to create a support and information hub for the growing number of pit bull victim groups. NationalPitBullVictimAwareness.org tracks pit bull attacks on an interactive map as they are reported by the media in the US and Canada. The resource is intended to help citizens, policymakers and elected officials better understand the scope of this increasingly urgent public safety issue. The website features state- and province-wide reports of serious pit bull attacks, disfigurements and fatalities, along with legislative updates pertaining to the breed.

In June of this year, 55-year-old Christiane Vadnais of Montreal, Canada, was fatally attacked in her own backyard by a neighbor’s pit bull. As a result of Vadnais’ death, Montreal City Council recently voted in favor of adopting measures to restrict the keeping of pit bulls. The breed-specific legislation (BSL) requires mandatory sterilization of pit bulls, secure containment at home and the use of a sturdy leash and muzzle while in public.

In a recent report on BSL, DogsBite.org, a charitable organization dedicated to reducing serious dog attacks, states that jurisdictions in at least 14 states and provinces have achieved successful results after enacting a breed-specific ordinance. In the past two-and-a-half years, 90% of state BSL pre-emption bills proposed by pit bull activists, which would prevent local governments from enacting pit bull bans, were rejected. This year, Missouri, Kentucky, Washington, Georgia, West Virginia and Idaho all voted against BSL pre-emption – a 100% success rate in retaining local control of animal ordinances.

With pit bulls making up 37% of all dogs surrendered to US shelters, an important outcome of BSL is the alleviation of suffering of the dogs themselves. In an opinion piece for Newsweek, Daphna Nachminovitch, VP of Cruelty Investigations for People for the Ethical Treatment of Animals (PETA) calls pit bulls “the most abused dogs on the planet, hands down,” and writes, “Cities that have passed legislation similar to Montréal's report a dramatic drop in the number of pit bulls entering shelters. In San Francisco, the number of pit bulls euthanized at the city's animal-control facility dropped by 24 percent just 18 months after it had passed a law requiring that pit bulls be sterilized.”

In an effort to recognize the full impact of pit bull ownership on families and communities, the National Pit Bull Victim Awareness website also examines the effect of pit bulls on public safety, and the often devastating social and economic results after an attack. Various stakeholders in the pit bull issue are identified, including taxpayers, legislators, emergency and healthcare workers, animal control officers, law enforcement agencies, pet owners, farmers and humane organizations, among others.

Partner organizations in the NPBVA initiative include sponsor Daxton's Friends (Wisconsin), along with Dangerous By Default (Maryland), Protect Children from Pit Bulls and Other Dangerous Dogs (California), BanPitBulls.org (USA and Canada) and Awareness for Victims of Canine Attack - AVOCA (Worldwide).

About National Pit Bull Victim Awareness:
NationalPitBullVictimAwareness.org lists more than 70 organizations and advocacy groups from across the continent whose purpose is to alert the public and the media to the pit bull crisis. NPBVA also maintains a list of pit bull victims who are available for interviews with the media. Individual state and provincial maps of pit bull attacks are available by request to editor(at)nationalpitbullvictimawareness(dot)org.

About Daxton's Friends for Canine Education & Awareness:
Daxton's Friends was formed in honor of Daxton Borchardt, who passed away on March 6, 2013, due to severe injuries sustained in a dog attack. Daxton's Friends strives to educate the public about the importance of understanding dog breeds and how, with proper education and pet care, the number of dog-related incidents can be reduced. http://www.daxtonsfriends.com/

About Awareness for Victims of Canine Attack (AVOCA):
AVOCA is a national ad hoc coalition of bereaved families and survivors of canine attack. Our mission is to educate the public about dangerous dogs, and in particular fighting and gripping breeds, with respect to the risk they present to human and animal health and safety. http://www.VoicesoftheVictims.org