‘Women Must Lead If Humanity is to Survive,’ According to Author Julian Cribb

Female leadership is one of the essential solutions to the ten huge existential risks which overshadow civilisation, according to the powerful new book "Surviving the 21st Century," released internationally this week by science publisher Springer Nature. 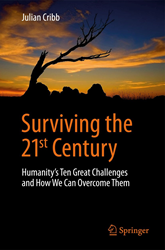 “It’s a matter of choosing the kind of leadership which can best get us through the most dangerous era in all of human history." - Author, Julian Cribb

Women must become leaders in government, business, religion and social institutions around the world – if humanity is to have a chance of surviving the growing threats it faces, says author Julian Cribb.

“As a rule, women don’t start nuclear wars, dig coal, destroy landscapes and forests, pollute air and oceans or poison their children. They tend to think more about the longer term than do men, and about the future needs of their children and grandchildren. They tend to seek peaceful and constructive solutions to problems rather than fighting over differences in values and beliefs, or resources.”

“Pragmatic male thinking has largely driven humanity’s remarkable ascent, our great technological successes. But in a hot, overcrowded, resource-depleted world it is also our potential downfall, due to the vast risks that modern civilisation is now accruing.”

"Surviving the 21st Century" lays out the scientific evidence for each, and explains how they are now combining to menace the human future.

It also describes the wisest solutions, which need to be taken by governments, corporations and by individuals worldwide if we are to successfully overcome these risks.

“Many people consider the biggest threat is human overpopulation. Well, the good news is that women everywhere are already taking action to reduce human fertility. They have brought the birth rate down from 4.4 children per woman in the 1970s to 2.4 children today – and it is still falling, in every continent and almost every country.

“Moreover, women are taking the decision to lower human fertility often without male approval. It is a responsibility the female of the species has undertaken because she instinctively understands the dangers inherent in uncontrolled population growth.”

“So when I argue that women should lead humanity in this century, it isn’t an issue of gender or politics. It’s part of the new rules for human survival.

“It’s a matter of choosing the kind of leadership which can best get us through the most dangerous era in all of human history.

“Female thinking can save the planet, and humanity. And this means female thinking by men as well as by women. But we need a majority of wise women in positions of power if we are escape the fate which aggression, overconsumption and overpollution are creating for us.”

"Surviving the 21st Century – Humanity’s ten greatest challenges and how to overcome them," is published by Springer US and Springer International Publishing AGF, Switzerland.

Read reviews of "Surviving the 21st Century" at Springer.com.