“Hottest” new publications, “Most Intriguing” individuals and industry’s “Rising Stars” will be honored at an awards celebration in New York City on December 8, 2016. 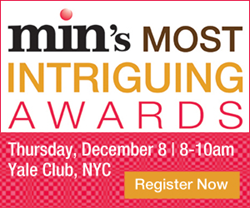 The 30 “hottest” magazine launches of 2016 have been announced by min in collaboration with Samir “Mr. Magazine” Husni. The list—composed by “Mr. Magazine” himself—is an annual partnership between min and Husni, dating back to 2003.

To qualify for the 2016 “Hottest Launches,” publications needed to be distributed sometime between October 2015 and September 2016. Of the 790 new publications created during that time, 217 of those magazines were published with a regular frequency. As “Mr. Magazine” said in a recent article for min, “Selecting only 30 out of the 217 was almost impossible. Almost.”

While every magazine will be honored at the awards breakfast on December 8, one lucky publication will be named THE hottest launch of the year by guest presenter and list creator Samir Husni.

The awards breakfast is held in tandem with “min’s Rising Stars Awards,” which honors up-and-coming talent in the magazine media industry. Selected individuals have been referred by their company or peers for this prestigious honor. Additionally, the awards breakfast honors the “Most Intriguing” professionals of the year. These individuals have made a unique impact in the realm of magazine media.