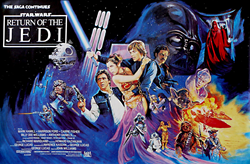 I can see no better place than Alien Con to introduce Josh’s extraordinary work to a new audience of science fiction fans.

The Josh Kirby Estate is proud to be reintroducing the art of legendary UK artist Josh Kirby to the USA with an appearance at Alien Con. This inaugural event in Santa Clara, CA, October 28 - 30, is the perfect setting to present Kirby’s out of this world art to a new generation of sci-fi fans.

Rob Liano, Chief Marketing Officer of the Josh Kirby Estate, said “Being the artist behind the UK film poster for Star Wars: Return of the Jedi is surely enough to earn Josh a place in the hearts of American sic-fi fans, so we’re honored to have been invited to introduce an exclusive line of merchandise featuring his iconic illustrations to the thousands attending Alien Con.”

Although a legend in the UK and Europe, Josh Kirby has remained rather anonymous in the US, in spite of the fact that many of his science fiction, horror and fantasy illustrations are instantly recognized. His cover art distinguishes countless book titles by literary legends including Sir Alfred Hitchcock, Ian Fleming, Isaac Asimov, Jules Verne, Jack Kerouac, Ray Bradbury, Ursula K. Le Guin, Jimmy Sangster, Robert Matheson, Edgar Rice Burroughs, H.G. Wells, and Sir Terry Pratchett of Discworld fame.

Amy Anderson, Executive Director of the Josh Kirby Estate, said “I can see no better place than Alien Con to introduce Josh’s extraordinary work to a new audience of science fiction fans. And of course we’re bringing a 6 foot cutout of one of Josh’s favourite alien creations, so visit us at booth #506 and take a selfie with him, and by the way, we’re raffling him off at event’s end.”

Alien Con is the very first convention devoted to fans of HISTORY’s Ancient Aliens, sci-fi buffs, and pop culture enthusiasts alike. For three days only, Cosmic-Con®, the event division of Famous Monsters of Filmland magazine, and HISTORY® are teaming up to celebrate all things not of this world, both in science and in pop culture, on Halloween weekend, the perfect time for a close encounter.

With the Estate being dedicated to continued exposure of Josh Kirby’s art and legacy through licensing and merchandise, an appearance at Alien Con can only add to future growth and exposure of the renowned artist.