The Chicago law firm of Power Rogers & Smith secured over $180 million in settlements for their clients in the past year, more than any other firm in the area. 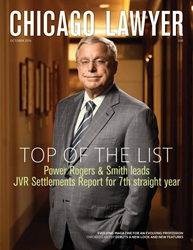 Joseph Power, Jr. on the cover of Chicago Lawyer Magazine

Power Rogers & Smith maintained its position at the top of the Chicago Lawyer Settlements Report for the seventh year in a row, continuing to set the bar of excellence for lawyers throughout the Chicago area. Through their tireless work, the attorneys secured nearly $184 million in settlements between July 1, 2015 and June 30, 2016, including 52 settlements of at least $500,000.

The firm thanks its referring attorneys and clients for entrusting them with the important work of prosecuting catastrophic injury cases and thanks its attorneys and staff for their tireless work on these causes. It takes more than luck to remain atop this list for seven years in a row, and the firm will continue to learn and improve in order to best serve our clients and secure justice for injured victims throughout the Chicago area.

Power Rogers & Smith, P.C. is a personal injury law firm based out of Chicago, IL dedicated to protecting the rights of injured victims. Over the past 20 plus years, our attorneys have secured more than $3 billion in verdicts and settlements for our clients. To contact one of our personal injury lawyers, give us a call at (312) 313-0202, or visit our website at http://www.prslaw.com/.