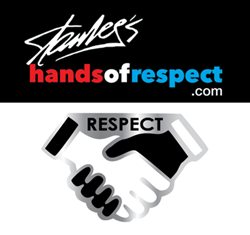 Seeing the challenges faced in the country, Stan Lee’s daughter J.C. approached him and asked if there was something they could do. As a result of their conversation, Lee created the RESPECT pin -- “Two hands, black and white, clasped in a friendly handshake under the word ‘Respect’ signifying unity to inspire mutual Respect for all.”

“This is an intensely personal project of mine,” said Lee, “and it is my hope that the RESPECT pin spreads into the general culture and becomes a symbol that builds bridges in communications, encourages conversation and brings together and inspires us to RESPECT one another in dialogue and actions. The goal is to get a “Hands of Respect” pin to every law enforcement officer and ultimately in the hands of every person, in our country. In the process, community members of all ages will get involved in the movement,” he added.

For over five decades, Stan Lee has created iconic superhero characters that have inspired millions of fans. As a non-partisan, non-political and neutral world-wide celebrity Stan is in the unique position to bring various parties together as he often has in his comicbook stories. In his 90+ years, Stan’s voice speaks from a position of wisdom that young children to the most senior of adults can understand and respect.

“I have always included minority characters in my stories, often as heroes. We live in a diverse society – in fact, a diverse world, and we must learn to live in peace and with respect for each other,” Lee noted. “As a believer in the inert goodness of man, I’m hoping that the RESPECT pin will serve to remind people that America is made of different races and different religions but we’re all co-travelers on the spaceship Earth and must respect and help each other along the way,” he added.

To join the conversation and help support the campaign, visit http://www.handsofrespect.com.

On July 22, 2016 at the San Diego Comic Con, Stan made the first public announcement of his plans for the RESPECT Initiative. https://www.youtube.com/watch?v=F0IWt4I6Bm8&feature=youtu.be.

The City of Concord, California led by Mayor Laura Hoffmeister and Chief of Police Guy Swanger became the first city Mayor and police department Chief in the country to officially support the concept of the RESPECT campaign. And, Concord, CA based Land Home Financial Services became the first nationwide company to support the RESPECT Initiative by sponsoring pins for all their employees across the country.

“The City of Concord, California and the Concord Police Department take pride in our police-community partnerships. The innovative programs such as the Central County Family Justice Center, our partnership with the Mt. Diablo School District and Monument Crisis Center to address gang violence, and so many others were born through the foundation of mutual respect. As Chief of Police, I know that the expression of respect for both law enforcement and those we serve is critical to securing the safety and security of our residents. I am proud to endorse and support Stan Lee’s RESPECT Initiative by promoting the “Hands of Respect” pin to encourage dialogue and bring together and inspire us to RESPECT one another,” said Guy Swanger, Chief of Police, Concord, California.

"For generations Stan Lee 's work has provided us with a vision of hope in a world where ordinary people can be superheroes. That vision continues with the Stan Lee's Hands of Respect," said Chief Paul M. Cell, Vice President, International Association of Chiefs of Police.

"San Diego is proud to host the International Comic Con and Stan Lee every year. Public safety is a shared responsibility let's all come together and unite as one. We are looking forward to partnering with Stan Lee's “Hands of Respect initiative," said San Diego Police Chief Shelley Zimmerman.

On Friday, November 18, Stan will make an appearance at the Marvel Avengers S.T.A.T.I.O.N. located at the Treasure Island Hotel Casino in Las Vegas, Nevada and promote the RESPECT Initiative.

ABOUT STAN LEE
Stan Lee was born Stanley Martin Lieber on December 28, 1922. He is an American Hollywood executive, producer, comic book writer, editor, actor, publisher, television personality, and the former president and chairman of Marvel Comics. Comicbook legend Stan Lee is considered the godfather of the modern day superhero. He has exerted more influence over the comicbook and entertainment industry than any other figure. He is revered by fans of all ages world-wide and amongst all cultures.

Stan Lee co-created some of Marvel’s most recognizable characters including Spider-Man™, Iron Man™, The Incredible Hulk™, The Fantastic Four™, X-Men™, The Avengers™, Thor™, Doctor Strange™, Daredevil™ and hundreds more fictional characters, introducing complex, naturalistic characters and a thoroughly shared universe into superhero comicbooks. Lee subsequently led the expansion of Marvel Comics from a small division of a publishing house to a large multi-media company which was acquired by the Walt Disney Company in 2010.

Stan Lee received the Vanguard Award from the Producer’s Guild of America in 2012 and was inducted into the comicbook industry's Will Eisner Comic Book Hall of Fame in 1994 and The Jack Kirby Hall of Fame in 1995. He received a Star on the Hollywood Walk of Fame in 2011. Lee is currently Chairman and Chief Creative Officer of POW! Entertainment, a multi-media entertainment company with projects in development and production around the world.

Stan wrote this poem about Respect:

He favored none, He loved each one
And kept that love alive

Instead of love some practice hate
A practice we must ban

Respect for all, in every way,
Should be our battle cry

It's not too late to initiate
Friendship between the races

So let's heed the call of the Lord of All
With the love that He embraces.