A new study by Queendom.com and Psychtests.com comparing belief in various paranormal phenomena reveals that women are more likely to be drawn to and to believe in the mysterious and unexplainable. 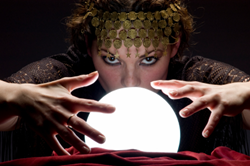 Women are more likely than men to believe in the unseen, but men are not closing the paranormal door entirely.

Women tend to be more open-minded in general, willing to stretch their mind beyond the seemingly impossible.

With notions like “women’s intuition” and “old wives’ tales,” it’s almost as if women were fated to be intertwined with the paranormal. Even the senseless and misguided witch hunts that plagued Europe and America during the 15th to 18th century targeted women almost exclusively.

In modern times, research by Queendom.com and Psychtests.com reveal that although superstitions have tapered off, women are still more likely than men to believe that there is more to this world than meets the eye.

Collecting data from 11,377 people who took their Paranormal Beliefs Test, researchers at Queendom compared women’s and men’s beliefs in paranormal phenomenon like witchcraft, aliens, ghosts and folklore. In some cases, the differences were quite staggering. Women were more likely to believe in notions like fate and karma as well as psychic phenomenon, while men limited their beliefs to more scientifically based unknowns. For example:

As for men’s beliefs:

Surprisingly, an equal amount of men and women believe in the Loch Ness monster (36%), and that the world will end in an apocalypse of Biblical proportions (21%).

“Men tend to lean more toward phenomena that can be measured or observed scientifically,” explains Dr. Jerabek, president of PsychTests, the parent company of Queendom. “Even if images of Yeti or UFOs are suggestively blurry, many still believe that it’s only a matter of time before proof is found. In contrast, women’s beliefs in the paranormal are more likely to revolve around romantic notions, like fate and destiny, and the possibility of moving beyond the veil of death. In fact, 70% of the women in our study believe that two people who are meant to be together will be, while less than half of the men believe this to be the case. Women tend to be more open-minded in general, willing to stretch their mind beyond the seemingly impossible. They are also more likely to trust and listen to their intuition.”

Want to assess your paranormal beliefs? Check out http://www.queendom.com/tests/take_test.php?idRegTest=710

Request a free demo for a variety of assessments from ARCH Profile’s extensive battery: http://hrtests.archprofile.com/testdrive_gen_1

It takes an open mind to believe in the unseen, the mysterious, and the unexplainable.Men and women couldn’t be more different when it comes to belief in the paranormal.