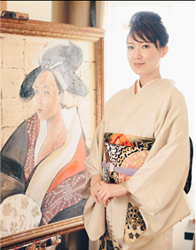 “I am absolutely honored that Mr. Guest would ask me to be the center of one of his paintings, we both have an immense passion for art and spirit”

Japanese actress Rio Mizushima has become the muse for renowned artist Chaz Guest. The artist has painted prestigious figures such as President Obama and also has his painting of Supreme Court Justice Thurgood Marshall hanging in the oval office.

Miss Mizushima started her acting career in Japan's most prestigious Theatre Company 'Haiyu-za' where she first fell in love with the craft which then led to her appearing in popular Japanese television shows and inspired the move half way across the world. In her first week of being in LA Rio was approached by a theatrical agent who wanted to sign her straight away.

The daughter of an artist, Rio was born in Tokyo and raised in the countryside where she developed a love for films, books and learning about human nature. She appreciates the smaller things in life and is devoted to bringing the beautiful Japanese culture to America. One day she hopes to get the perfect role which will show the true Japanese way of life. “I would like to see a Geisha played by a Japanese actress in a major motion picture, and one day I hope this role will come up for me to portray”.

The award winning actress studies Karate when she is not working to keep her mind and body strong, this is where she met Mr. Guest which felt like fate, he was immediately drawn to her Samurai spirit. Guest then asked her if he could use her image in a painting and having heard of him years earlier in Japan she did not hesitate to say yes. “I am absolutely honored that Mr. Guest would ask me to be the center of one of his paintings, we both have an immense passion for art and spirit”.

Rio can currently be seen in in the movie “Last Call” directed by Richard Tatum who is known for the series “We’re alive”.