GetApp releases its Q4 2016 ranking of the top CRM solutions 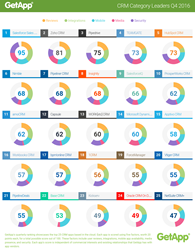 Salesforce has done a terrific job of making it to the top of the ranking, 14 points ahead of its nearest competitor with an impressive total score of 95.

Salesforce has dominated this quarter’s ranking of the top 25 CRM solutions based in the cloud, coming in at first place for the second quarter in a row. Zoho CRM and Pipedrive rounded out the top three, coming in at second and third, respectively.

GetApp’s Category Leader ranking rates apps on five criteria, each worth 20 points, for a total potential score of 100. These five criteria include user reviews, mobile app availability and ratings, software integrations, media presence, and security. The ranking is meant for business owners and decisions makers as a starting point when looking for a new CRM for their business.

“Salesforce has done a terrific job of making it to the top of the ranking, 14 points ahead of its nearest competitor with an impressive total score of 95. A perfect 20 in security and integrations, a 19 for its user reviews and mobile applications, and a 17 for its media presence make Salesforce a force to be reckoned with in our Category Leader ranking for CRM. Notably, Zoho CRM and and Pipedrive also had impressive showings in second and third place, with Zoho scoring 19 for reviews, and Pipedrive scoring a 20, to help bring their total scores to 81 and 75, respectively,” says Suzie Blaszkiewicz, project manager for GetApp’s Category Leader ranking.

Click through to see the entire Q4 2016 Category Leader ranking of the top 25 CRM solutions.

More about GetApp: GetApp is the leading premium business app discovery platform on the web. Headquartered in Barcelona (Spain), GetApp serves as a platform for user-generated and editorial reviews of software and apps for businesses.
###