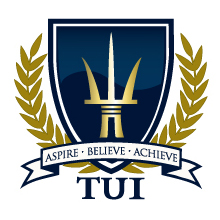 Despite her challenges, Katke was a very good student in Trident’s BSHS program and is the living embodiment of ‘Trident Strong.’ - Dr. Nathaniel Ofoe

Katke, who is legally blind, walks with a cane, and has difficulty with her memory, was shot in the head by a sniper’s bullet in 2010 while on a joint Navy SEALs/Army Special Forces operation in Iraq. The wound was near fatal, and she earned a Purple Heart for her heroism.

“Despite her challenges, Katke was a very good student in Trident’s BSHS program and is the living embodiment of ‘Trident Strong.’ Staff and faculty have been very understanding of her situation, and have been been willing to help her at each step along the way,” said Dr. Nathaniel Ofoe, Professor, College of Health and Human Services.

In July, she took part in the weeklong Combat Wounded Veteran Challenge for coral restoration efforts at the Mote Marine Research Laboratory in the Florida Keys. She hopes to return to Mote in the future for an internship that will help achieve her next goal – a career that will benefit the planet.

Katke is currently enrolled in Trident’s Master of Science in Health Sciences program.

For any media inquiries, please contact Daniel Sloan at daniel.sloan(at)trident.edu.